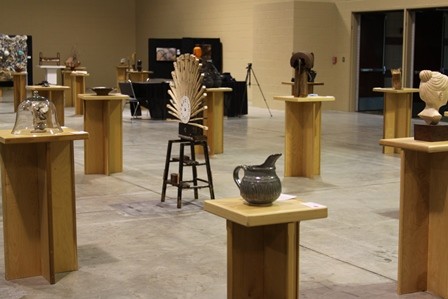 Fine craft artists from across the state are invited to participate in the thirteenth annual South Carolina Palmetto Hands Juried Fine Craft Competition and Exhibition.  As the state’s only fine craft competition and exhibition, objects juried into the show may compete for cash prizes totaling up to $6500. The exhibition is presented as a component of the annual North Charleston Arts Festival, to be held May 2-10, 2014. The application is only available online and may be accessed via the link at NorthCharlestonArtsFest.com/apply. Deadline for submissions is Friday, March 14, 2014.

Organized and presented by the City of North Charleston Cultural Arts Department, this unique exhibition offers fine craft artists from across South Carolina the opportunity to exhibit their inspiring objects in the media of clay, fiber, glass, metal, wood, and three-dimensional mixed media.  Thousands have enjoyed the refined talents of South Carolina fine craft artists during past annual exhibitions.  Following the close of the show, up to thirty works will be selected to tour the state through the South Carolina State Museum’s 2014/2015 Traveling Exhibitions Program.  Sites across South Carolina may request the exhibit to tour in their facilities, thus providing additional exposure for the selected artists.

Alfred D. Ward NDD, ATD, Emeritus Professor in the Fine Art Department at Winthrop University, will jury this year’s exhibition.  Ward was appointed Professor of Art and Design at the University of London in 1966. In 1974 he became the Head of the Department of Silversmithing, Jewelry at the Sir John Cass College of Art in London. As a consultant designer for Spink & Sons in London (by Appointment of her Majesty the Queen) he designed and produced pieces for The Royal Family, Revlon of Paris, and Covent Garden Opera House, among others. An internationally known designer, Ward’s work is featured in many museums and collections, including the Victoria and Albert Museum in London. Having moved to the United States in 1981, he taught at the University of Michigan and the Center for Creative Studies in Detroit. In 1985, he became the Director of the Appalachian Center for Crafts in Tennessee and in 1989 became the Chair of Art and Design at Winthrop University in South Carolina. Winthrop University awarded him the Distinguished Professor of the Year Award in 1998 and the Medal of Honor in the Arts in April of 2011.

The 13th Annual South Carolina Palmetto Hands Juried Fine Craft Competition & Exhibition will be on display May 2-10, 2014, at the Charleston Area Convention Center, located at 5001 Coliseum Drive in North Charleston. A free public reception and announcement of awards will be held at the Convention Center on Friday, May 2, 2014.    For more information about the North Charleston Arts Festival, Palmetto Hands, or other exhibition opportunities, contact the North Charleston Cultural Arts Department at (843)740-5854, email culturalarts@northcharleston.org, or visit NorthCharlestonArtsFest.com.

Head to the source at northcharlestonartsfest.com
Advertisement