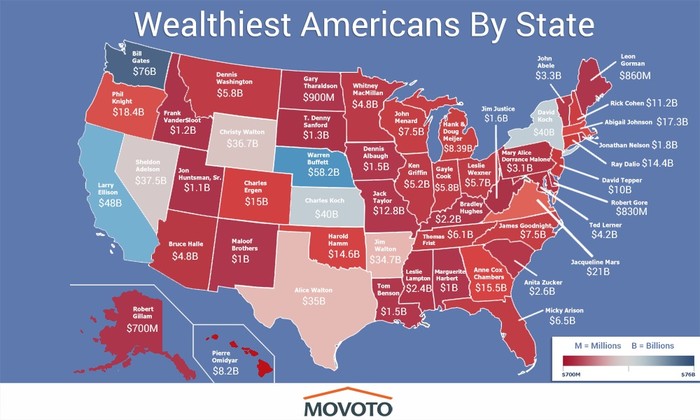 The folks over at the real estate website Movoto.com recently compiled data from Forbes and Celebrity Net Worth to create an interactive map showing who the richest person in each state is.

And who might be the richest person in South Carolina?

Anita Zucker, a Charleston, SC resident and the only billionaire in the state.

Anita Zucker is an American businesswoman and philanthropist. She is the first, and as of 2013 only, woman to have occupied the position of Governor (Chair) of the Hudson's Bay Company [...]  Zucker is the daughter of Holocaust survivors. She graduated from the University of Floridaand received a Masters of Arts from the University of North Florida.

She is the widow of the chief executive officer of the Hudson's Bay Company, Jerry Zucker, taking over following her husband's death. She owns the Carolina Ice Palace and half of the South Carolina Stingrays ice hockey team.

A philanthropist, she serves on the board of the Coastal Community Foundation, and as a trustee of the Saul Alexander Foundation and the Jewish Endowment Fund. She has sat on the boards of the Charleston Metro Chamber of Commerce, Trident United Way, the MUSC Foundation, and Porter-Gaud School. A member of the Republican Party, she endorsed Mitt Romney in January 2012.

As of September 2013, she is the 554th richest person in the world, and the 194th richest in the United States, with an estimated wealth of US $2.6 billion. She is the only billionaire living in South Carolina. She has three children: Jonathan Zucker, Andrea Muzin and Jeffrey Zucker. She lives in Charleston, South Carolina.

Head over to Movoto.com to check out their interactive map.

But in my opinion, this app makes batteries wasteful because we have to open it simultaneously with Pokemon Go. Features of this application is quite complete. We can set notifications for pokemon that we wanted.
pokemesh

ShowBox for Android is the best way to feel some real time while having some cup of tea/coffee with a lot of movies loaded on it already. ShowBox So keep loving this movies app for long lasting entertainment to you and your family.