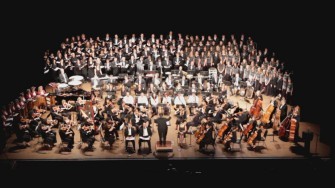 Songs of Life Festival: A Melancholy Beauty is a musical event recounting the little-know story of how Bulgaria’s 49,000 Jews were saved from the Nazis by ordinary citizens, church and government officials. It is being performed to commemorate the 70th anniversary of the 1943 rescue.

The world premiere was at the Kennedy Center in Washington, D.C., followed by performances at Avery Fisher Hall at Lincoln Center in New York, both with the National Philharmonic, and the Wang Center in Boston with the Boston Modern Orchestra Project.

The work was organized and commissioned by Varna International, a concert production company based in Columbia, SC. The organization was founded 15 years ago by husband and wife Kalin Tchonev, a native of Bulgaria, and Sharon Tchonev, a native of Israel whose Bulgarian grandparents were among those saved. Varna International produces festivals and concerts and training programs in choral, orchestral and opera music throughout Europe, Israel, Turkey and the U.S. Varna International mounted a concert commemorating the rescue in Bulgaria and Israel in 2008. In Bulgaria, the organization handed out 49,000 flowers to thank them for their part in the rescue.

For more information go to http://songsoflife.org/