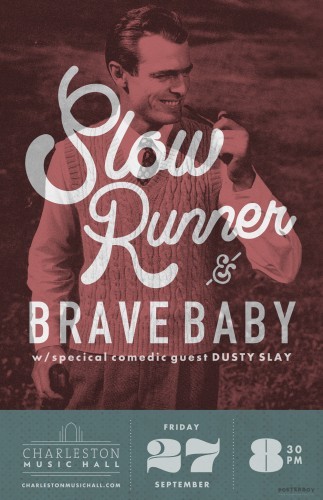 Slow Runner is an indie-pop band based in Charleston, SC.  Built around singer/songwriter Michael Flynn and multi-instrumentalist Josh Kaler, the group’s quirky and intelligent ‘dork rock’ has taken them around the world, into and out of the major label record business (with SONYBMG) and continues to earn a growing grassroots/internet following.  The band has released four full length records, an EP, and, most recently, a series of singles.

–Songs featured in ad campaigns for Nivea, Kia, Microsoft and others

–Toured extensively in United States, Canada, and Europe with bands like Built to Spill, The Avett Brothers, William Fitzsimmons, Josh Ritter, Gomez, and others

Paste Magazine names Slow Runner one of 25 bands worth watching due to the “sonic atmosphere — elegant, corroded, and lurking about … Slow Runner is the rare band that can mourn and bewail, then hope and ramble on, all with one hand on the blip-and-bloop button for good measure.”

“…set to do for geek-rock what Zach Braff did for television sitcoms– re-define ultra cool.” –Blogcritics.org

“…at first listen makes you summon that Shazam app on your iPhone and ask, ‘Who’s that?’” –Huffington Post

Brave Baby emerged from the dissolution of one band and the identity crisis of another with relations between members Keon Masters, Wolfgang Zimmerman, and Christian Chidester spanning back to 2008 in the Charlotte area of the Carolinas.

In 2010, the trio reunited in the poetically historic Charleston, South Carolina. Masters had moved down a few years prior to start his undergraduate studies at the College of Charleston, urging his friends to join him in the bustling tourist town. Inspired by the change of scenery, the band was able to develop their sound and flourish in the local scene, quickly garnering local success and defining what would become later become known as Brave Baby. During this time Zimmerman established himself as the most sought after indie rock producer in the area, working with Octopus Jones, Sequoyah Prep School, Elim Bolt, and various other acts around the South East.

In 2011, Brave Baby began recording what would eventually become their debut album “Forty Bells” in Zimmerman’s storage unit turned cozy intimate recording studio where the band spends most of their time. “Forty Bells” features Masters’ lyrics uncover the feelings we have long lost but not forgot- ten about our parents, our childhood, and our early encounters with love, all delivered with an uncanny urgency that is hard to shake. Guitar work by Chidester reaches for the atmosphere while being anchored by Zimmerman’s solid propulsive timekeeping and colorful production work.

After going through various lineup changes, Brave Baby has enlisted long time friend and fellow musician Jordan Hicks on the bass guitar and new addition Stephen Walker on keys and is set to release their debut album “Forty Bells” on Charleston based independent label Hearts and Plugs.

Dusty Slay
Who is Dusty Slay? You mean besides a hero? Dusty Slay is a clean stand up comic based out of Charleston, SC. He has performed at New York’s Gotham Comedy Club, Del Close Festival, all over the southeast and even as far as LA (All three of them, Los Angeles, Louisiana and Lower Alabama). Dusty has worked with a variety of comedians including Michael Ian Black, Nate Bargatze, Joe Torry, Vic Henley, Jerry Farber and Rory Scovel and has also served fried seafood to SC Senator Lindsey Graham while working his day job.  For 9 years Dusty has lived the life of a struggling comedian making people laugh in bars, for 5 of those he’s actually been a comedian. Recently Dusty was asked what was his style of he comedy, he simply replied, “the funny kind”.