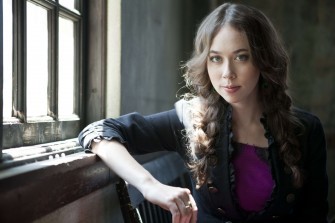 SARAH JAROSZ is a 22- year-old, Grammy-nominated singer, songwriter and multi-instrumentalist who hails from just outside Austin, TX.  A recent graduate from the prestigious New England Conservatory, she will release her third album, Build Me Up From Bones, for Sugar Hill Records on September 24th.  Over the past four years, Jarosz, who musically fits comfortably where contemporary folk, Americana and roots music intersect, has covered a remarkable amount of ground thus far.  She has toured the United States extensively, as well as Canada and the UK, taped Austin City Limits and the BBC Series The Transatlantic Sessions and appeared on A Prairie Home Companion.  Her two previous records (Song Up In Her Head and Follow Me Down) received high praise from outlets including Rolling Stone, New York Times, USA Today, Paste, Mojo, Acoustic Guitar andAmerican Songwriter, and she has received multiple Grammy and Americana Music Association nominations.

Sarah is supported on the road by stellar musicians Alex Hargreaves (fiddle) and Nathaniel Smith (cello).  Hargreaves recently completed the prestigious Berklee Global Jazz Institute at the Berklee College of Music in Boston and has been tapped to perform and record with such musicians as Jerry Douglas and jazz master Danilo Perez.  Smith has toured for years with renown Cape Breton fiddler Natalie MacMaster and, more recently, in various configurations with Jeremy Kittel.  Jarosz, Hargreaves and Smith, who met at various music camps when they were much younger, have been performing together since 2010; the sheer joy they express on stage during performances is contagious.  Hargreaves and Smith are both featured on Jarosz’s upcoming release Build Me Up From Bones.

Brian Wright
Sugar Hill Records is proud to continue its legacy of incredible songwriters with the release of Brian Wright’s House on Fire – due out March 29th. While this is the first label release from the Waco, TX native, he has built a firm base of fans within and beyond the music industry with two previous releases and tireless touring in the US and Europe. Unlike previous releases, which were both recorded in the studio with a band, House on Fire approaches the recording process in a much more relaxed and reflective manner, with Wright playing every instrument himself and handpicking his prolifically written songs into a mindful, well-curated collection.
And make no mistake, this album truly is about the songs. Gems like “Mean ol’ Wind” and “Live Again” convey the tenderness of the soul which very few songwriters can capture. “Striking Matches” and “The Good Dr.” bring the driving sound of a cross-country bound train, bound for heartache or redemption. “Maria Sugarcane” paints with a Southern Gothic brush that would make Flannery O’Connor proud.

“When people ask what I sound like, I usually say I’m somewhere between Woody Guthrie and Velvet Underground,” says Wright. “This album finally allowed me to make the music the exact way it was in my head.”

After spending his early twenties on the Austin/Waco/Dallas bar circuit, playing everything from punk to covers, Wright flipped a coin to decide his future home, either New York City or Los Angeles. Going West won the day. Today, when not touring, he resides in Los Angeles where he is a fixture in the LA music scene. For the last six years he has been the front man and lyricist for his band Brian Wright and the Waco Tragedies, a band that has gathered a devoted audience across the country.