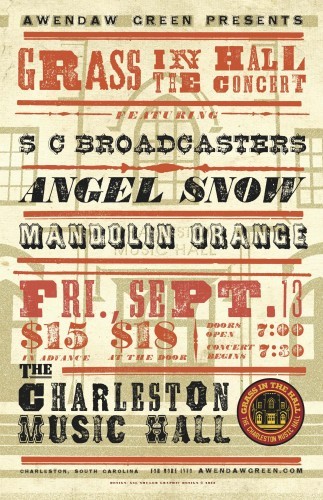 The South Carolina Broadcasters “Southern children going forward at top volume” is truly what this little mission band born at a Bar-B-Que joint on the side of the road is. The South Carolina Broadcasters are not to be missed. From heart stompin’ love songs to rowdy gospel numbers that’ll make you shout hallelujah there is a rare beauty and honesty in the trio’s music. Ivy, Sarah, and David share a common passion that creates a sound that often amazes even them. “It’s not old-time, it’s not bluegrass, it’s The South Carolina Broadcasters!” Be it an old standard out of the hymnal or a song from their own pen, their music is alive. The trio has shared the stage with Ralph Stanley, Taj Mahal, Ricky Scaggs, and the Carolina Chocolate Drops and can be found touring the country and bringing their distinctive sound to a venue near you. To top it off, Ivy and David are very dear friends, and we cannot wait to celebrate with them.

“Mandolin Orange carries an understanding of tradition and shapes it into a thing of beauty. They craft simple songs that go beyond chord progressions and vocal harmonies, leading somehow toward something pure. Using acoustic and electric guitars, mandolin and a hand-me-down fiddle, Andrew Marlin and Emily Frantz allure with a heart-worn sensibility. Last year’s Haste Make/ Hard Hearted Stanger combines bluegrass, rock and country for lullabies that swoon.” Over the last few years, Mandolin Orange has shared bills with Rosanne Cash, Chatham County Line, the Steep Canyon Rangers and Abigail Washburn, and traveled as far as the UK to perform at festivals, including Ulster’s 21st Annual Bluegrass Festival, Shakori Hills Grassroots, and Hopscotch Music Festival.

Angel Snow: The highest caliber of artistry is often intertwined with the deepest sincerity. As is the case with rising star Angel Snow, whose music is the truest and most honest reflection of her life. Her story plays out in self-penned songs, where detail by detail she lets the listener in on her innermost thoughts, hopes, and dreams. Sometimes sorrowful, often hopeful, and always looking toward faith, Snow’s music is nothing if not sincere. Combine this honesty with sweeping folk melodies and bluesy guitar riffs, and the result is the captivating landscape of sound found on her new self-titled album. Fate and faithful perseverance have brought Snow to the present, as she prepares to release her second full-length set. With a major boost from acclaimed star Alison Krauss, Snow’s lifelong dreams are coming to fruition. Krauss and Union Station recorded three songs written by Snow for the deluxe edition of the band’s latest album.