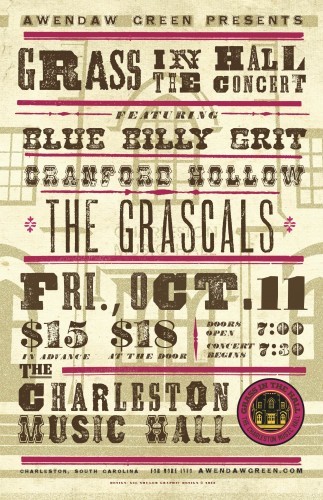 BlueBilly Grit: From the side porch of an old gristmill to the main stage of The Telluride Bluegrass Festival, BlueBilly Grit has quickly become a force in Bluegrass and Americana. Their modern style, which blends these two genres of music, has a way of appealing to the newer generation of the grassroots movement and to those that have a love for the more traditional sound. Their unrivaled three part harmony, traditional instrumentation, and the lead vocals of their soulful female singer are what make this magical blend work. BlueBilly Grit takes pride in the fact that they’re not just another “hot lick, blazing solo” bluegrass band. It’s all about the song with this group, and rightly so because they have something to say!

Cranford & Sons: The South has a sound. It’s gritty. It’s the stomp of a boot on a dirty bar floor. It’s the clang of a whiskey bottle and the holler of a rowdy crowd. It’s Cranford & Sons. It’s the music that developed among the various natives and immigrants to this land when she was still in her rugged and untamed infancy. It’s been around in one way or another since before the concept of the United States even existed, and is woven all throughout her history. Cranford and Sons is remastering it for the 21st century.

The Grascals: Great musicians will always find a way to make good music, but for great musicians to make great music, they must form a bond – one that, more often than not, goes beyond the purely musical to the personal. For The Grascals, that bond has been forged at the intersection of personal friendships, shared professional resumes and an appreciation for the innovative mingling of bluegrass and country music that has been a hallmark of the Nashville scene for more than forty years. As their releases prove, The Grascals’ rare musical empathy gives them an unerring ear for just the right touch to illuminate each offering’s deepest spirit – whether they’re digging into one of their original songs or reworking a bluegrass classic or pop standard.