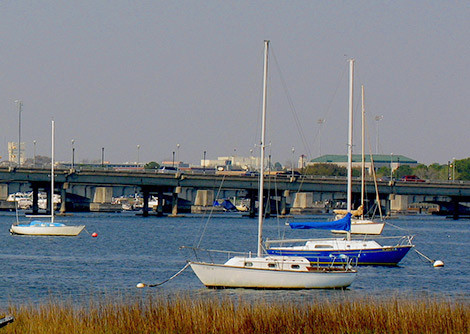 Image by flickr user byrdiegyrlImage by boat.jpg Boating is popular on the official first weekend of summer, but enforcement agencies are stressing safety on the Lowcountry's waterways.

Boating safety is a big topic this Memorial Day weekend, as the U.S. Coast Guard and the state Department of Natural Resources are ramping up efforts to ensure safety on the area's waterways.

For starters, the state Department of Natural Resources is offering courtesy boating inspections throughout the weekend. According to a press release on the DNR Web site:

In an effort to keep state waterways safe during the upcoming Memorial Day holiday weekend, the S.C. Department of Natural Resources Law Enforcement Division will again be conducting courtesy safety inspections at some public boat landings.

DNR boating safety and enforcement officers will perform a quick, but thorough, inspection for items such as required safety equipment and proper boat and motor registration. "Those who are not in compliance with safety regulations or registration requirements will not be ticketed during the complimentary inspections," said Col. Alvin Taylor, deputy director of the S.C. Department of Natural Resources (DNR) Law Enforcement Division. "Instead, they will be given an opportunity to correct the problem before they launch their boat." DNR officers will also be available to answer questions and give boaters tips on how to stay safe on the water.

The DNR press release also includes a schedule of courtesy inspections for boaters to check out.

According to Live 5 News, more than 600 people were killed in boating accidents across the nation last year. They are reporting that the Coast Guard is stepping up patrols over the holiday weekend, as well as DNR.

The Post and Courier describes the inspections taking place during the holiday weekend:

At the inspections, officers primarily checked for personal flotation devices (life jackets), boat registration, fire extinguishers, whistles and air horns and navigation lights. According to a news release by the U.S. Coast Guard, 90 percent of people who drowned in boating accidents in 2006 were not wearing a life jacket.
The No. 1 violation is boaters not having the correct number and size of life jackets, (the DNR's Col. Alvin Taylor) said. Other contributing factors in boating accidents include careless operation, operating without education and boating under the influence of alcohol.

The Post and Courier shares this advice from the Coast Guard: "Capt. Mike McAllister stressed for boaters to have a float plan, working VHF radio, life jackets and boater education. McAllister said 70 percent of all boaters have never had a boater education course."

WCBD offers its take on the safety inspections, as well:

DNR officers Cpl. Aaron Brown and Ben Whaley pulled up beside boaters all Sunday afternoon to make sure captains had the proper safety equipment on board. Officers checked for registration, life jackets, fire extinguishers and a horn or whistle. Not having that equipment could cost you a $100 to $500 dollar fine. Some people passed the inspection, while a few received a warning. Corporal Cpl. Brown says all boaters need to check their equipment twice before drifting away from the dock.

As WCBD reports, state law requires boaters to have a life jacket available for everyone on the boat, and children 12 or younger must wear a life jacket at all times on boats smaller than 16 feet.

Astounding lighting up post!!! I'm truly awed subsequent to comprehension this offer or this site post.And welcome the time and exertion you experience to allow this to us!!! I believe this post will be an extraordinary work for the readers moreover I might need to welcome you for this supportive post.Sure I will share this huge information about such a particular point with my buddies and diverse readers who are interested to scrutinizing such a post.
Ref: http://essayreviewratings.com/