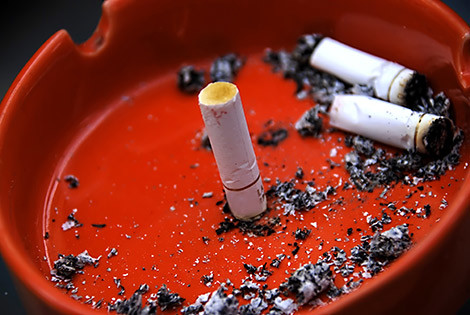 Image by stock.xchng user vivekchughImage by smoking.jpg After Gov. Mark Sanford vetoed the cigarette tax hike, the bill returned to the House to see if lawmakers there could override the veto. The push to override failed 54-57, not even gaining a simple majority, much less the two-thirds needed to advance the bill to the Senate.

This afternoon, Gov. Mark Sanford vetoed a bill that would have raised the states's cigarette tax by 50 cents, to 57 cents a pack. Sanford said in a statement that his decision to reject the tax was based on the fact that it would raise the overall tax burden on state residents, as well as that the expansion of Medicaid benefits it would include were "irresponsible." From the governor's statement:

"We’ve been calling for an increase to the cigarette tax for five years, but the question has always been what happens to the money," Gov. Sanford said. "While I’d applaud the General Assembly for finally moving a cigarette tax proposal to my desk, I can’t in good conscious sign off on something that both increases the overall tax burden, and is completely irresponsible in the way it expands a host of Medicaid benefits without any way to pay for them in future years. That gives state government three alternatives to keep providing those benefits — raise taxes, cut other programs, or start encouraging people to smoke more to foot the bill."

The bill returned to the General Assembly, and the House took up the issue the same day, but legislators there failed to get the two-thirds majority needed to advance the bill to the Senate. House lawmakers accepted the veto in a 57-54 vote. The Post and Courier reports:

The plan to raise the state's lowest-in-the-nation cigarette tax for the first time since 1977 was defeated 54-57 Tuesday when the House fell some 20 votes of the two-third needed to override a veto by Gov. Mark Sanford.

Supporters said it could have provided as many as 200,000 more South Carolinians with health care coverage, but opponents said it would have committed the state to funding pro-grams with a declining revenue source, since the money generated was expected to decrease as more people quit smoking.

The Post and Courier article also includes a list of how Charleston-area representatives voted on the issue.