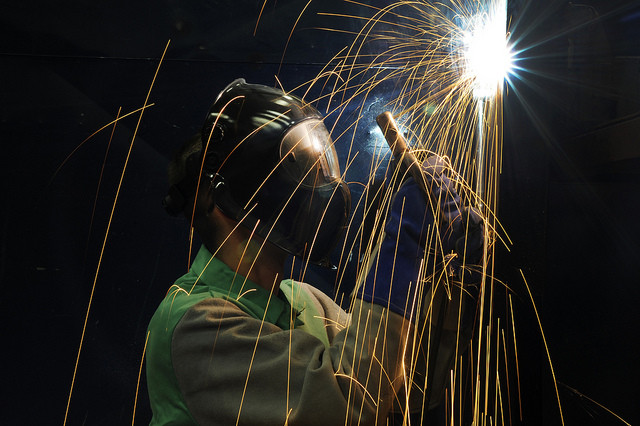 2:45 am on Saturday December 17, 2011 | Posted by Ken Hawkins
Charleston-North Charleston score in top 20 for economic growth

Image by James M. Bowman/Air Force 1.2% of the area's job growth in 2011 was attributed to the military. Here U.S. Air Force Airman 1st Class James Moreland welds a vertical arc on a piece of metal at the Aircraft Metals Technology Shop on Joint Base Charleston.

The Charleston area is always scoring high on lists, and usually it's for being a great place to go to school, find attractive folk or food, or just be a great travel destination. But that's changing a bit with a number 11 rank for the local economy.

The Charleston-North Charleston metro area climbed 10 spots this year on the "Best-Performing Cities of 2011﻿" list by the Milken Institute.

﻿While there are no particular defining news announcements that resulted in Charleston's rise, a continuing growth in jobs, wages, and output of the region earned the praise (details here), things that are in large part thanks to a continued military presence and, of course, Boeing's much heralded arrival.

The Institute wrote in its report: "Charleston’s vibrant aerospace sector combined with a stable military presence contributed to overall job growth of 1.2 percent in the year ending June 2011. Thanks to aerospace and data processing (hosting) services, Charleston ranked 16th in high-tech output for the five-year period. Boeing’s new 787 Dreamliner assembly plant is clearly generating positive ripple effects as well: InterTech, a provider of aircraft components, is bringing 350 high-skilled jobs to North Charleston, where the first phase of a roughly $35 million plant is expected to open in fall 2012. 26 Among the big employers are Naval Weapons Station Charleston and Charleston Air Force Base, with a combined workforce of nearly 18,000. A steady influx of retirees will continue to boost health-care and support services.﻿"

The next highest-ranking area in South Carolina was Richmond-Lexington counties at spot 77.

Head to the source at news.google.com