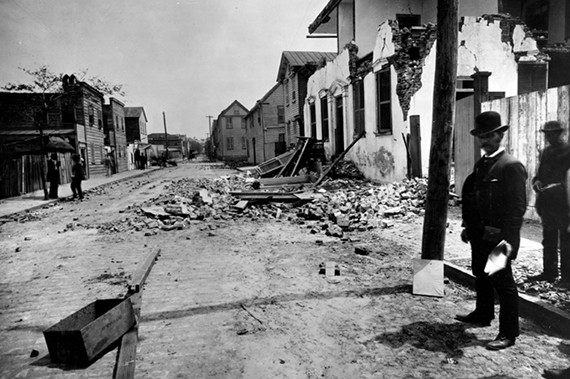 Image by USGS A photo after the 1886 quake in Charleston, shot shows a fissure and a wrecked brick house on Tradd Street.

It was August 31 of 1886 near 10 p.m. when the largest recorded quake to ever shake the east coast erupted in 1886 near Summerville.

It was estimated to be a 7.3 event — for perspective that makes it far more powerful than the 5.8 that recently shook Virginia — and an estimated $23 million in 1886 dollars was inflicted on the city and region that had not too long ago emerged battered by the Civil War.

As for immediate risk, geologists estimate we have well over 100 years until the next big one (the average time between such events is believed to be about 500 years) however the time until another Virginia-like event may be far sooner and quite dangerous.

Not only does Charleston have many old structures (and structures that have been bolted together after the 1886 quake) but there is added risk in how much new construction since 1886 has occurred on land that was once marsh and is far more prone to earthquake damage.

Landfill or no, Charleston's buildings are still at significant risk and as tribute to that several downtown Charleston schools are undergoing reconstructions.

The Post and Courier﻿ has a nice report reflecting back on the quake (read that here) and a Q&A about Charleston's risk today (read that here). For a look at photos from the quake I'll point you to the gallery at the Saint Louis University Earthquake Center (see them here).

There's also a popular book of first hand account and other info on the quake that was published in 2006, "City of Heroes: The Great Charleston Earthquake of 1886." The author was interviewed on S.C. ETV Radio.

If you're new to earthquakes in Charleston, check out this S.C. DNR page.