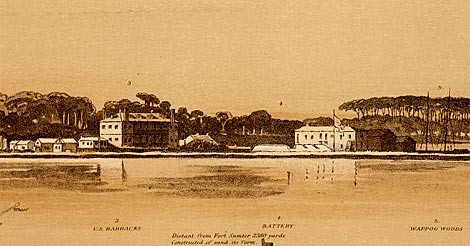 Image by Cartography AssociatesImage by 20081208-fort-johnson.jpg A partial view of Fort Johnson as seen on February 13, 1861. View larger. Most of the original fortification were likely already lost to history.

A tourist in Charleston often hears three big names: Fort Moultrie, Castle Pinckney, and Fort Sumter. Poor Fort Johnson is often neglected despite the fact is far older and was the location of where the first shot was fired on Fort Sumter.

And though 2008 marks the 300th anniversary of the fort's creation, there is little uptick in visitors to the fort. The problem is, there's not too much to see.

Last year, The Post and Courier wrote an excellent piece on the current state of the site, in part:
If visitors know where to look, they can find a small stone marker placed in 1961 to explain that the historic mortar shot was fired nearby. There also are two or three modest structures that reflect the fort's late 18th century and early 19th century eras. Some earthworks remain along a nature trail.

The only immediately noticeable remains of the fort today is a magazine likely erected in the 1820s.

But Nic Buttler, of The Charleston Archive, instead choses to focus on the historical journey of the land. An excerpt from his piece in the latest CharlestonCurrents:
It began as a triangular fort, made almost entirely of earth, but it was later repaired with bricks and tabby after being damaged by several hurricanes. It was essentially rebuilt and expanded in the 1730s and again in the 1750s, using tabby walls as a bulwark against the encroaching tides.

So, instead of seeing the fort, you can learn loads more about it on Thursday, December 11, at 6:30 p.m. when the Charleston Archive and the Mayor’s Walled City Task Force present a program on the site's history.