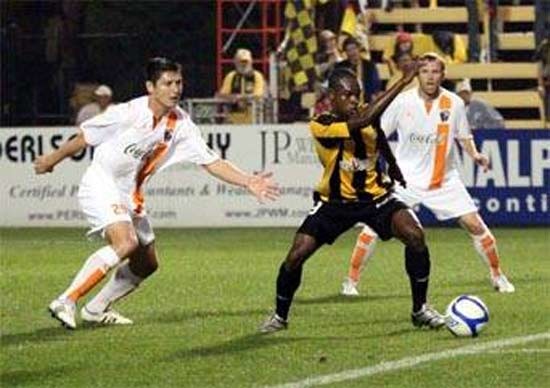 11:30 pm on Saturday April 9, 2011 | Posted by Ken Hawkins
A poor deflection to give the Charleston Battery a 1-0 win over Charlotte

Thanks to a number of saves by Charleston Battery goalkeeper Andrew Dykstra﻿, the defending USL champs eked out a win on their Saturday night season opener versus the Charlotte Eagles.

It was the first game of the season for both USL Pro Division ﻿teams, and they played before a crowd of 4,083 at Blackbaud Stadium on Daniel Island (yes, the same island where that other big sport event is happening).

And ultimately the Battery defeated the Eagles 1-0 thanks to Charlotte defender Mark Bloom's deflected ball that went into his own net in the 58 minute mark.

At any rate, here's a full rundown of the game from the Battery:﻿

“It wasn’t the best performance, but you look up and it’s 1-0 and we got the three points. You could tell we had some nerves out there,” said Battery Head Coach Mike Anhaeuser.  “Overall though, I am very pleased with the team's performance and of course the result."

The Battery’s first chance of the evening came in the fifth minute when forward Levi Coleman beat the Eagles' defense to play the ball through to fellow forward Dane Kelly, but the pass proved just a touch too far for a quality strike.

Minutes later, Battery defender Mike Zaher made a one-two pass to Stephen Armstrong for the cross from the right hand side of the box. Armstrong’s cross was met by Dane Kelly, who was well placed, but his shot was just wide of the net.

Charlotte’s first major chance of the night came in the 40th minute. Eagles forward Sallieu Bundu lifted a shot on target from just inside the box, but his attempt was intercepted on the goal line by the diving efforts of Battery defender John Wilson.

“We had a lot of chances, and it wasn’t our intention to get behind 1-0; we’ve got some stuff to work on,” said Charlotte Head Coach Mark Steffens.

The goal came after Battery midfielder Nicki Paterson played a long ball down the sideline for Dane Kelly, who beat his defender with a burst of pace. As he approached the box, Kelly drove the ball in and the ball squirmed into the goal off Eagle’s defender Mark Bloom.

Next up for the Battery is a visit to new USL PRO franchise the Dayton (OH) Dutch Lions next Saturday night. The game will be streamed live on USLLIVE.com with kick off set for 7:30 PM.