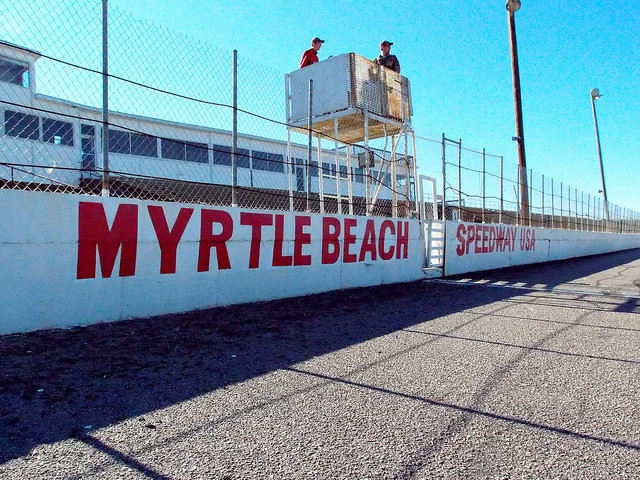 The Myrtle Beach 400 is set to run next week at Myrtle Beach Speedway with five classes of race vehicles competing on the .538 mile asphalt oval.

The headliners for the week will be the NASCAR Whelen All-American Late Model Stock Cars, former winner Sam Yarbrough is set to race Chad McCumbee’s Chevrolet and has been dialing his car in all season posting three wins.  Each fo them were in the “Dash for Cash” special invitational events.  Justin Milliken also has two wins and a “Dash for Cash” victory.  These are the two local hot shots that face off against the likes of former Myrtle Beach 400 winner Frank Deiny, Coleman Pressely, another “Dash for Cash” winner and son of Robert Pressely, and last year’s winner, Garrett Campbell.

The “Dash for Cash” special invitational races will feature Yarbrough, Milliken, Pressely, and the pole winner and outside pole winner, from time trials of the Myrtle Beach 400, in a 25-lap race paying $2500.  This is a winner take all purse.  The green falls of this race at 5:30 on Saturday afternoon.

A strong runner this season has been the Dodge of Jeremy McDowell, who posted three wins and ran at the front during the first half of the last year’s 400 until an accident spoiled his chances at the win.  Over seventy cars are expected to check in for the Myrtle Beach 400 in the top division with qualifying on Saturday at 2:00 p.m.  The race is on Sunday at 2 p.m. and pays $10,000 to the winner.

The South East Limited Late Models will take the green flag Sunday at 12:15 p.m. in a 100-lap race.  The cars are similar to Late Models with exception of carburation.  The drivers are usually those with less experience or are on a budget.  The racing is keen and the drivers are trying to catch the eye of late model race car owners looking for drivers who show they have the ability to race a faster car.  A strong field is expected to show-up for the preliminary event before the 400.

Challenger cars, which are the junior division of the South East Limited Late Models, and designed for drivers still honing their skills.  This class is for drivers that have not yet won a championship nor won a race in the past five years in the Limited division.  Challenger qualifying will be held Friday at 1:30 p.m. and run their race for 50 laps on scuff tires at 3:00 p.m.  This will allow those drivers looking to gain experience a chance to run at historic Myrtle Beach Speedway.

The Mini-Stock class is a longtime fixture of racing that will run three five-lap heat races for qualifying on Saturday morning at 11:00 a.m. and race at 3:30 that afternoon.  Michael McKinnon, the track champion, will face off against the Fulfords, Willie, Adam, and Dub.  The Fulfords have been the dominate Mini-Stock drivers over the last ten years and are hard to beat.  The rules have been reset for this race and with the likes of Bailey Miles, Kevin Jackson, A.J. Sanders, along with Toyota driver Brian Bryant, and many more of the best Mini-Stock drivers from the two Carolinas, this racing will be exciting.

The Coastal/Pee Dee “Super Trucks,” which are headed up by Kevin Parson (son of the late NASCAR legend Benny Parsons), has lined-up a strong field of pick-ups.  Heading the list is Jamie Weatherford of Darlington in the Cannon Brothers truck.  Jamie has multiple championships at Myrtle Beach and has been one of most dominant trucks at the speedway.  Jimmy Herrington, Clay Thomas, Hal Goodson and son Hayes will be joined by more than 25 additional drivers looking to score a win in the big race.  Super Truck qualifying is Saturday at 12:15 p.m. and the race for 100 laps is scheduled for 6:00 p.m.

NASCAR Hall of Fame member and the second all-time winningist driver in the Sprint Cup division, David Pearson will be a special guest and Grand Marshall for the Myrtle Beach 400.  Pearson will reign over the speedway where he once was a competitor.  Pearson has not forgotten his roots in racing and said, “This is a special honor for me.  I sure wish them the best in their careers.  I remember when I was one of them, chasing that checkered flag!”

For the full schedule of events, head over to the Myrtle Beach Speedway site.  There you can also purchase tickets online.  You can also call 1-877-RACELAP for more information.

Myrtle Beach Speedway is NASCAR sanctioned and is located at the intersection of Highway 501 and Waccamaw Pines Drive next to the Tanger Outlet.