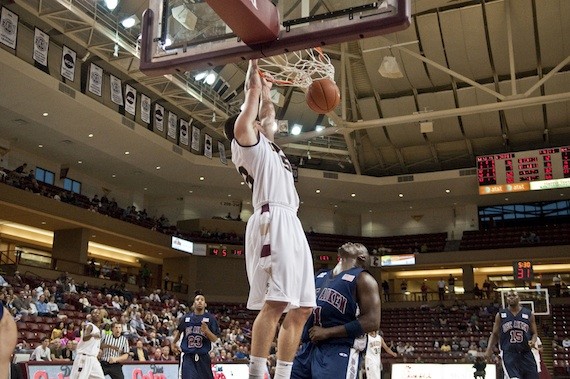 Update March 12: College of Charleston's SoCon title dreams were dashed by Davidson on Monday night with a 74-55 loss to the Wildcats.

The win gives Davidson an automatic bid to the NCAA Tournament.

The Cougars (24-9, 14-4) will face off against the Davidson Wildcats (25-7, 17-1) on Monday night at 7 p.m. on ESPN2. A win secures a spot for C of C in the NCAA Men's Basketball Championship Tournament, a feat that has eluded the school since 1999, which was also the last time it won the SoCon Tournament.

Charleston outscored Elon by six points in the first half last night, despite just two points from leading scorer Andrew Lawrence before the break. After halftime though, he exploded for 17 points, ending his night going a respectable 5-10 from the floor and hitting seven of his nine foul shots.

Fellow senior Willis Hall recorded his third double-double of the season in the victory, with 16 points and 10 rebounds in a team high 37 minutes on the floor.

Davidson has won its last 16 games overall, the longest active streak in all of Division I hoops. Coach Bob McKillop's squad leads the all-time series against C of C, 52-14, including bosting a 2-1 record against the Cougars in SoCon Tournament play. The Wildcats have beaten The College in both of their previous meetings this season.

See more about last night's game in this article from The Post and Courier.