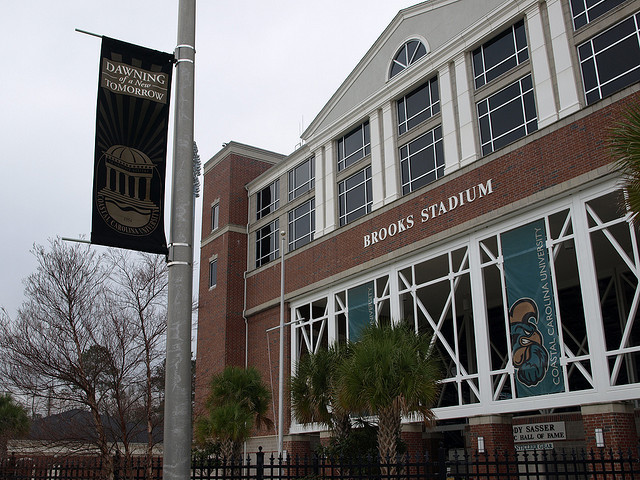 The Seawolves (6-1, 2-0) feature weapon, Miguel Maysonet, was as good as advertised. The senior running back transfer from Hofstra University had a career day rushing for 233-yards and adding two touchdowns along the way.

The Chanticleers (2-4, 0-1) took their first drive 75-yards down field on eight-plays and capped it off with an Aramis Hillary 24-yard touchdown pass to DaMario Bennett. This was only the second first-quarter touchdown allowed by Stony Brook all season.

Stony Brook answered right back with a 65-yard nine-play drive ending with a 10-yard touchdown pass from Kyle Essington to Jordan Gush tying the game up at seven a piece.

The Chanticleers found themselves still in the ball game as the second half pushed on. As the Chants confidence started to show, Maysonet’s legs started to heat up. Late in the third quarter Maysonet broke a 58-yard rush that put him over 1000-yards this season, the third season that he has done so. Nearly 200 of Maysonet’s 233-yards came during the second half: wearing down the tired legs of the Chanticleers.

Aramis Hillary took advantage of the well needed rest that came during last week’s bye week that helped him start the ball game with 16 completions in a row. Hillary ended up going 23-36 for 271-yards and one touchdown. Late in the first half Hillary hooked up with one of his favorite receivers, Matt Hazel, for a 55-yard pass: Coastal’s longest pass of the season.

Both Coastal Carolina and Stony Brook’s kickers had a tough game; Wesley Skiffington missed two field goals and an extra point in the ball game, as Alex Catron missed a 25-yard chip shot to close the first half. Skiffington’s missed point after touchdown came with about nine minutes left in the fourth quarter and showed signs of hope for the Chanticleers.

With less than five minutes to play in the fourth quarter, the Chanticleers were driving down field only down six points looking for the victory. On a second-and-six play from the Seawolves 40-yard line, Hillary connected with Hazel, but Hazel fumbled the ball on the 20-yard line. The Chants would get another crack at the six point deficit late in the game but failed to take the lead.

“I’m really disappointed that we weren’t able to come away with the win, just too many penalties and the fumble in the later part of the game -- we played a very good football team today and we certainly held our own,” Coach Moglia added after close loss.

The Chanticleers will try to put this upsetting loss quickly behind them as they get back to the practice field tomorrow afternoon. They will be preparing for a homecoming matchup versus Liberty University (2-4, 2-0) next Saturday afternoon.

Written by, Tom Michienzi. Tom is a producer for ESPN Radio 100.3'The Team' and the beat report for Coastal Carolina Football for ESPN 100.3 and TheDigitel Myrtle Beach. You can follow Tom on Twitter @Tmichienzi18 or for questions call 774-254-4165.