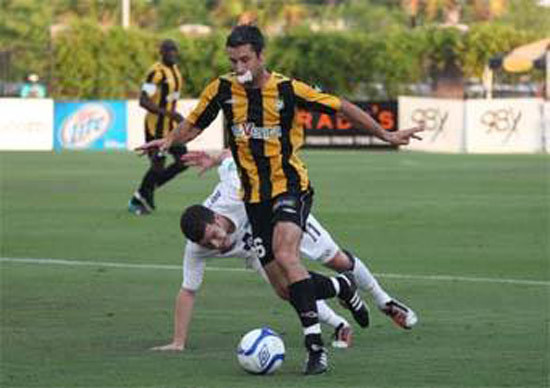 After a rough couple of weeks, the batter is back at it with two consecutive wins, this time besting the Harrisburg City Islanders 2-1 Saturday night at Blackbaud Stadium in front of 3,715.

Both teams finished the match short-handed as three players received red-cards in a ill-tempered match, but the Battery prevailed with goals from Stephen Armstrong and Nicki Patterson.

With the win Charleston (5-4-2) remains in 4th position in USL PRO’s American Division one point behind Antigua Barracuda FC.

Harrisburg broke the deadlock in the 6th minute with well worked goal down the right side.  David Schofield curled a deep cross to the back post and forward Jose Angulo headed past Charleston goalkeeper Keith Wiggans and into the goal.

Battery midfielder Evan Taylor came close to equalizing minutes later with a pair of long-range efforts.  The first shot was tipped over the crossbar by Harrisburg goalkeeper Chase Harrison and the second attempt whizzed wide of the far post.

The game changed in dramatic fashion in the 60th minute after both teams had a player ejected.  Charleston forward Dane Kelly chased down a ball in the box and collided with Harrison who had come off his line quickly to smother the attempt.

In the ensuing melee the referee awarded the Battery a PK, showed a red card to Harrisburg’s Stephen Basso and a second red card to Kelly.  After the protests died down Stephen Armstrong coolly converted the spot-kick to draw the Battery level.

The game winner came in the 86th minute after substitute forward Seedy Bah picked out Nicki Patterson with a driven pass at the top of the box.  Patterson controlled the ball with a neat touch before blasting past Harrison into the far corner.

Harrisburg were forced to finish the game with nine players as Jason Pelletier was sent off for a second bookable offense in stoppage time at the end of the match.

Charleston heads to New York next Friday night for a match versus F.C. New York and then will take on Harrisburg on Saturday night; both games can be heard live on 1340 AM