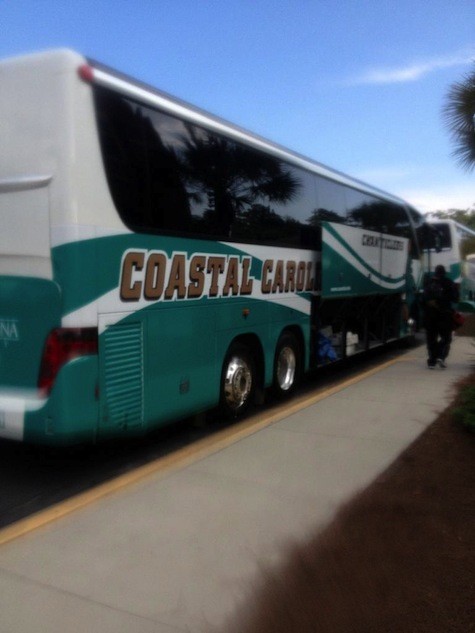 At 5:30 p.m. today three coach buses loaded with the Coastal Carolina Chanticleers (1-0) and departed for Greenville, South Carolina, home of the Furman Paladins (0-1).

Coming off a 29-13 victory over North Carolina A&T, Aramis Hillary and the Chanticleers will look to silence the Paladins’ crowd in their home opener. It will certainly be a tough task for the Chanticleers considering the Paladins have not lost to a non-conference opponent at home since 1999.

Johnny Hartsfield and the rest of the Coastal Carolina defense are looking to bring their success from last week to the Upstate. “I’m very confident in our defense, we have a great coaching staff, great group of guys, amazing group of seniors; I will be confident all year,” Hartsfield said.

During the mid-week press conference Coach Moglia acknowledged that penalties are a key area that his team needs to touch upon. “For the last five years we've lead the league in the most penalties and that’s something we need to turn around, last week we had about 70 yards of penalties, most of which could have been prevented, we must show improvements on those lines,” Moglia added.

Aramis Hillary is coming off of a career day versus the Aggies with 274-yards through the air. The senior quarterback’s dual threat is what opened things up downfield for him last week, adding 37-yards on the ground. The Paladins’ defense is very susceptible to the long ball; last week they allowed 126 yards on three receptions alone. Mastromatteo and Hazel should therefore be looking to have a big day off of Hillary’s arm on Saturday.

During the mid-week press conference Hillary also reiterated that each week needs to be treated like a new season. Coastal Carolina will be looking to go 1-0 in their so called “second season” of the year.

Written by, Tom Michienzi. Tom is a producer for ESPN Radio 100.3'The Team' and the beat report for Coastal Carolina Football for ESPN 100.3 and TheDigitel Myrtle Beach. You can follow Tom on Twitter @Tmichienzi18 or for questions call 774-254-4165.