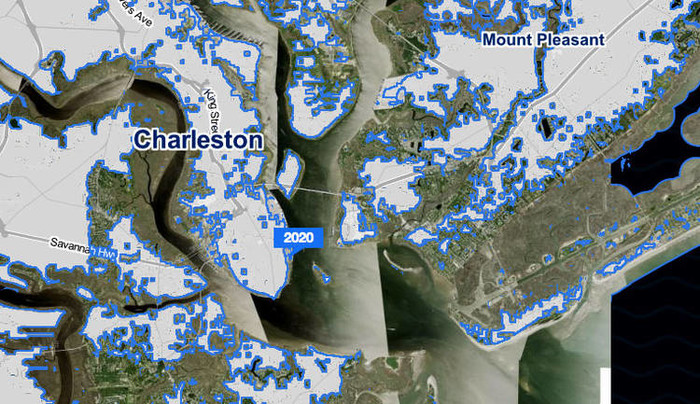 In this scenario of a four-foot sea level occurring, only the white areas would be above water.

Live in downtown Charleston for just one summer and you'll shrug off talk of flooding — as soon as you hear the rain pounding you'll know to grab the nearest kayak and paddle down to wherever you might need to be.

But, of course, sea level rise stands to make things much much worse for us in the Canal City, and a global warming awareness group is using data from new papers and a unique approach to help spread awareness of the risks tied with sea level rise.

Climate Central created a website that combines detailed map data with a Google Maps-style interface to make it easier to explore where the biggest risks are.

Show above is peninsular Charleston and the surrounding areas, and, namely, how much of these areas stand a good risk at being submerged at least once by 2020 — or, more specifically, the non-white areas have at least 1-in-6 chance of being underwater at least once by 2020 thanks to the combined effects of sea level rise, tides, and storm surges.

All wet would be the east side of the peninsula and nearly all of Isle of Palms, seeing significant areas flooded would be: Mount Pleasant, James Island, Folly Beach, and Sullivan's Island.

By 2100 the report gives our are a 1-in-6 chance of seeing a rise at least once of more than 10 feet — something that would easily swallow much of downtown Charleston, and all but erase the Isle of Palms, Sullivan's Island, James Island Folly Beach, and even much of Mount Pleasant.

Check out the doomsday Charleston-area map over here.

Not included in the study are the effects of a major hurricane that could easily swell several more feet.

Sea level rise is nothing new to the Lowcountry, and we've long heard about the risks it brings.