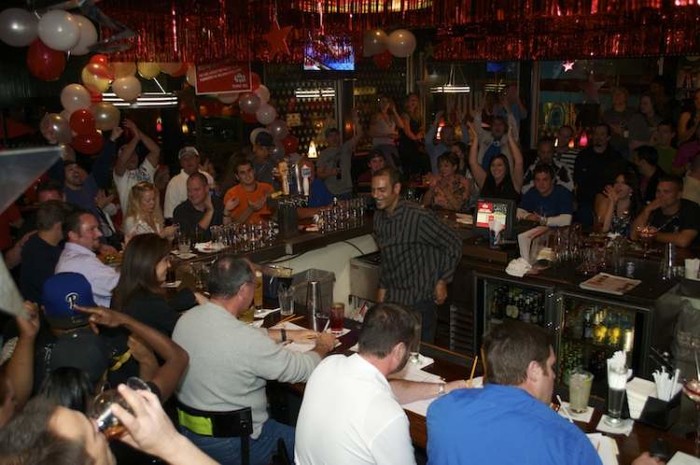 Image by www.myrtlebeachscene.com Crowed Cheering on the North Myrtle Beach Bartender in the competition

I have a soft spot in my heart for T.G.I Friday's, especially for the one located on 76th Avenue in Myrtle Beach. Friday's was my first job and I worked there from when I was 16 years old until I was 22 -so, basically I grew up there. Made a lot of friends I still am in contact with today. So with that said, that's why I'm always winding up at, going to or talking about T.G.I Friday's.

I caught word that the Regional Bartender Championship was being held here in town and not only that, at my old home away from home, the Friday's on 76th Avenue; so I knew I had to get down there! I hadn't been to a Friday's Bartender Championship in years and just had to see if the same spirit was still present at these competitions. And, yes, yes it was! There was some great bottle-spinning skills (or maybe you'd prefer for me to cal it Flair?) being displayed. From Bartenders who had only been with the company for six months to ones whom I knew back in the day and were very happy to see again.

Each Friday's, nation wide, holds their own in-store Bartender Championships -since the Grand Strand has three T.G.I. Friday's, we are lucky enough to have three right in our back yard! After each store crowns a winner, they move on to the regionals. This year the Regionals were held at the Myrtle Beach Friday's and included bartenders showing, not only their alcohol and flair knowledge but also had to endure tests on food, speed, and pouring accuracy (those are all done behind the scenes, before the main event). The T.G.I Friday's bartenders that participated this year were from: Myrtle Beach, North Myrtle Beach, Murrells Inlet, Mt. Pleasant SC, Wilmington NC and Raleigh NC. As I said, they all did a fantastic job, but in the end, Ali King whose home store is located in Raleigh took the title! Along with the fun, tricks and drinking, T.G.I. Friday's also used the night to raise money for charity. Auctioning off the drinks that te Bartenders made during the competition. One drink, even went for $60! But most averaged around $20. Also included was the selling of raffle tickets for prizes and an all out bidding war style auction!

All in all, it was a great night. Lots of fun was had and money was raised for charity. Personally, I would like to congratulate Tree from the North Myrtle Beach Friday's for participating and kicking some butt in the competition; also, I want to give a huge congratulations to Ali, a long time friend and super cook chick, for winning it all!

And HERE to see the video!