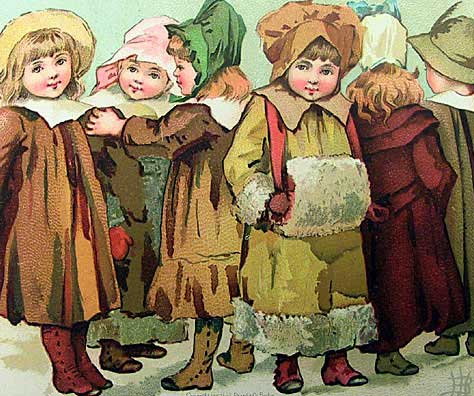 “At Christmas season, cards mailed definitely mean so much more. I send a variety of cards: religious, funny, wintery scenes and cards with animals themes. I try to pick something that would mean more to each individual. I love receiving cards.” Diana Marie Reed

In the Charleston area, we are beginning to think about Christmas cards and this card is by Louis Prang, who printed the first Christmas card in America in 1875. According to most historians the first Christmas card was printed in England in 1843, when Sir Henry Cole, director of The Victoria and Albert Museum in London, became weary of hand penning Christmas greetings and commissioned illustrator John Callcott Horsley to design a printable card.  The card caused an uproar. The family at the Christmas dinner scene on the front of the card showed a young child drinking wine. Neither the Puritans nor the general public were amused.

Seasonal Greetings wishing joy and goodwill have timeless origins. In pre-Christian times the Romans brought gifts on New Year’s Day and ancient Egyptians exchanged tokens of good luck.  A gift of honey symbolically wished the recipient a sweet and prosperous year ahead. In England, school children created “Christmas Pieces,” of loving sentiments hand written in rhyme and artfully decorated. These were given to parents as gifts and as examples of the child’s improving penmanship.

Henry Cole’s Christmas card cost one shilling, a week’s pay in the 1800s. The postal act of 1840 brought about the penny post, which allowed mail to be sent anywhere in England for a penny. This and the 1850’s migration from farms to industrial towns popularized cards as a way to keep in touch.

Louis Prang is considered the father of the American Christmas card. Prang was a Prussian immigrant and lithographer, who lived near Boston. His cards first appeared in 1875. Prang sponsored Christmas card competitions with big money prizes, employing Louis Tiffany and other prominent people as judges. The publicity was good for sales and by 1881 sales of Christmas cards were booming.

Changes came when cheaper cards began to be imported from Germany but World War I put a halt to German imports and the American Greeting card industry flourished again.

Religious themed Christmas cards were popular with each decade. Secular themes have changed over the years, reflecting social trends. 1920’s cards were more deco in their artwork and 30’s cards depicted the modern animated cartoons, as well as social issues like unemployment and hunger. World War II brought patriotic themed cards.  The1950’s cards showed abstract designs as well as humor, automobiles and Television themes. The 1980’s cards showed more signs of prosperity in America and with the emphasis on health and fitness, Santa lost some weight. The 1990’s cards brought more technological references. Modern cards are warmer and fuzzier than cards from earlier times, with wishes for peace, harmony and caring.

For Christmas 2012 trends, we decided to ask some questions on Facebook. The majority of respondents emphatically wanted, “old fashioned, real mail cards,” and one person stated firmly that it would be a desperate day when she sent email cards.  Religious themed cards received strong support, as well as photo cards. The personal touch of a handwritten note or handmade card was appreciated. On average people are sending and receiving 30 to 60 cards with some sending around 100 or more.

Those in favor of electronic cards wanted to use the postal money for charity and others were concerned with the environment. Copied Christmas letter family updates got mixed reviews. Some survey participants loved them and others found them impersonal.

Shining through most comments was the value of the personal touch. Family photo cards, handmade cards, store bought hand signed cards and handwritten comments were all valued. We echo this sentiment. Our refrigerator proudly displays a letter and holiday drawings from our 5 year old grandson Wyatt. Recently our 9 year old grandson Mikey surprised everyone with his handmade cards and heartfelt message, “May all your wishes come true.”

Dr. Gordon Mercer is past president and on the Board of Trustees of Pi Gamma Mu International Honor Society and professor emeritus at Western Carolina University. Marcia Gaines Mercer is a published author and columnist. Gordon and Marcia Mercer were married in Charleston and have a place in nearby Garden City.