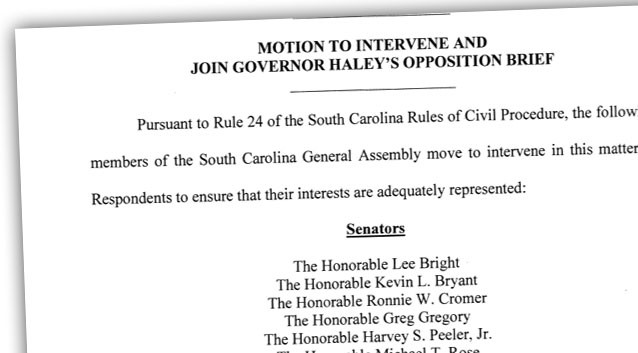 9:06 am on Wednesday June 8, 2011 | Posted by Ken Hawkins
Were lawmakers that backed Gov. Haley in S.C. Supreme Court case misled?

Here's your political tidbit for the day.

In the ongoing fallout from the Supreme Court showdown between our Republican Governor, Nikki Haley, and the leader of the Republican Senate, Glenn McConnell﻿, over who has the authority to recall the senate and when, a number of state legislators that backed Haley's side are saying they were misled.

At its core, some lawmakers are saying that the Haley administration misled them to say that Senator Tom Davis (R-Beaufort) had signed on to the case and it was only that fact that led them to join.

I'll shoot you over to political site FitsNews for a rundown on what's up; read it here.

But there are two big caveats that are worth nothing: 1) What politician doesn't like to backtrack when they land on the wrong side of the rope? 2) While Davis did not sign onto the filling, he was quite vocal in his support of the recall, so there's room for an earnest confusion.

You can see a full list of legislators that supported Haley here.

At any rate, break out the salt and keep up with the sad tale of politics in South Carolina on our Charleston topic page.﻿