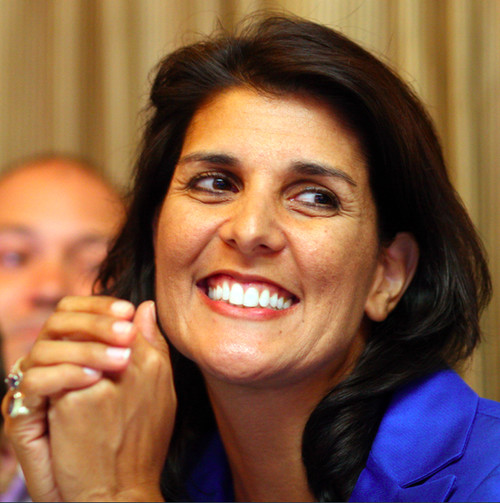 3:46 am on Saturday October 16, 2010 | Posted by Ken Hawkins
Two sign affidavits saying they had affair with Nikki Haley, but Haley won't bite (Updated)

Update October 16: Remember Larry Marchant who also said he had an affair with Nikki Haley? Well he's opened himself up to perjury charges too (if he's lying) as he's signed an affidavit saying, among other things that he and Haley, "went back to her room where we had sexual intercourse and I spent the remainder of the evening."

There's a short Associated Press report on the matter you can read here and read the one-page affidavit here.

Update October 15: WSPA 7 in the Upstate has a story on the matter and got Haley to respond. She says she won't sign a sworn statement that it didn't happen and that, "It's up to them to prove that is true."

In a move designed to get Republican gubernatorial nominee Nikki Haley to confirm or deny purported affairs, political columnist Will Folks has singed affidavit saying he had "romantic encounters" with the politician from early 2007 until June 2007.

Folks was asked to write and sign the document by the newly formed Republican group "Conservatives for Truth in Politics" that has been asking Haley to address issues of her faithfulness and tax and income issues.

The group says it is not endorsing any candidate in the race.

There's a nice Associated Press report on the matter that you can read here, and you can see a full copy of Folks' sworn statement here -- I pasted an excerpt of it below.

Representative Haley and I shared our first kiss while sitting in her parked car outside of MacDougal's restaurant and bar in downtown Columbia, S.C. This kiss took place in early 2007 following an evening with friends at the nearby Liberty Taproom. After this first kiss, Rep. Haley drove us to the parking lot behind the neighborhood center at Emily Douglas Park where we parked for approximately forty-five minutes. There we slid back the seats of her Cadillac SUV so that Rep. Haley could climb on top of me.

Rep. Haley eventually "backed off." As phone records confirm, we remained in contact. During one of our late night phone calls, Rep. Haley informed me that she wanted to confide in Eleanor Kitzman, who was serving as the Director for the South Carolina Department of Insurance, about our affair because she was hurt and had no one to talk to about it.

In addition to our phone calls, Rep. Haley and I exchanged numerous emails and text messages after the affair ended. I deliberately deleted these messages at the time because I had failed to honestly answer my wife's questions about my relationship with Rep. Haley.

Early in 2009, however, one of my late-night text message exchanges with Rep. Haley was intercepted by my wife while I was in the shower. My wife took the liberty of responding to Rep. Haley with the following text message:  "This is Katrina. Keep it business only."

I am shockef and angry. I voted for her thinking she was a victim of wrongful gossip! Seems that she is a loose woman and should not be Dog Catcher. This is another black eye for SC.