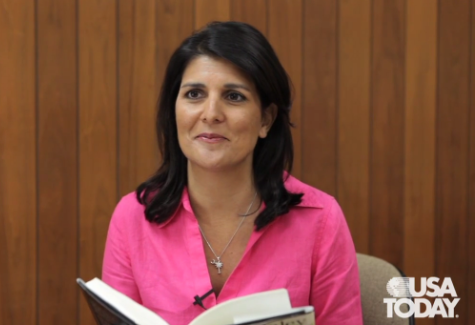 Update April 9th: Governor Haley will wrap up her South Carolina book tour with a signing at the Books-A-Million at the Myrtle Beach Mall.

over at Amazon.com and over on Apple's iBook store. Proceeds from sales of this book go to The Original Six Foundation, a nonprofit led by Haley to help families in distressed S.C. rural communities.﻿

Read more about the book signing and a Q&A with Governor Haley over at The Sun News.﻿

Update April 4th: Governor Haley's appearance on The View was pretty much tame, however there were some 'hot topic' issues that popped up.

Besides being asked about her alleged affiar(s), one of which was alleged to be with FITSnews' Will Folks, Haley did get in a bit of a sticky situation when she said, "women don't care about contraception" and then went on to say that women care about jobs.

Watch her appearance below or hop on over to The View's website. ﻿ ﻿

Update April 3, 2012 A.M.: Governor Haley is also making an appearance on The View this morning to promote her book release.

﻿ is available today and there is a piece on her and her book over at USA Today.

The book tells the story of Haley's family's move to Bamberg﻿, SC, their struggle to find a home, to fit in as an Indian family in a racially and economicly divided southern town, their eventual acceptance there and her birth there. Additionally it tells of her rise in the South Carolina political world.

"They pulled my parents aside and said they had a white queen and they had a black queen and they didn't want to upset either side by putting us in that category," she recalls, not the first time nor the last that their Indian heritage made it hard for her family to fit in this small town. "My mom said, 'Can she at least do her talent?' "

So she sang (irony alert) "This land is your land, this land is my land. …"

Haley's book will hopefully be a bit of good press amongst all the recent bad she has been getting as of late. Is her new book a launching point for a national political career or just the first salvo in a 2014 reelection campaign?

Head on over to USA Today to read their write-up about Haley and her book, also you can pick up Can't Is Not an Option: My American Story

over at Amazon.com and over on Apple's iBook store