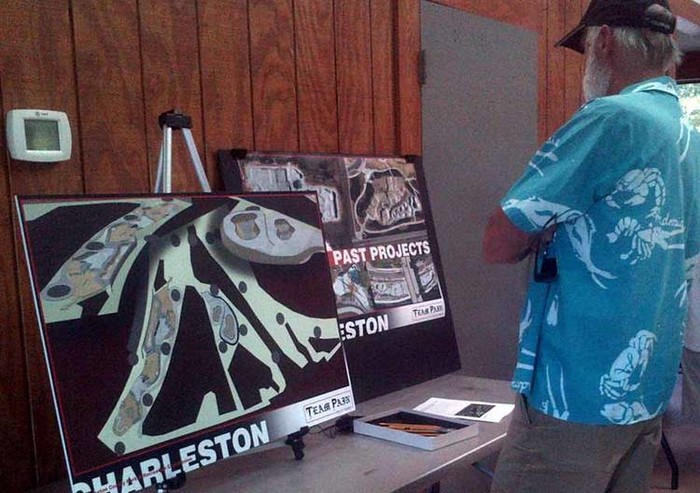 Image by Charleston County Park and Recreation Commission The proposed conceptual plans for the park.

As the grassroots process continues to secure a site for skateboarding park in downtown Charleston, the Charleston County Park and Recreation Commission's effort continues to make progress.

Though, even that group's $2 million plan has been largely stalled for the past 16 months, as the Parks Commission awaited site approval before spending design dollars. In June the group largely called uncle, agreeing to commission the site design to submit for state and federal review — the skate park site would be partly under the on-ramp to the Cooper River Bridge.

On Wednesday, Florida-based Team Pain unveiled a conceptual design for the 40,000-square-foot skate park at a meeting at James Island County Park.

Here's a bit about the design and timeline from a release:

The skate park’s design/build team is focused on creating a cost-efficient, quality, safe and durable skate recreation facility that meets the needs of the community while taking into careful consideration the park’s location. The park will also feature elements usable by BMX riders. Construction of the park will be led by Hightower Construction, a local company with over 50 years of experience ranging from projects for Boeing to other projects for the City of Charleston and Charleston County.

Design and construction of the skate park elements will be conducted by world-renowned design group Team Pain. Team Pain aims to design a one-of-a-kind skate park in Charleston that will be of “regional quality” size, in anticipation that the park will attract skateboarders from outside of the state.

“When we had the opportunity to hear the design team’s comments about the site, it got us all even more excited,” said O’Rourke. “Team Pain is one of the premier skate park designers in the world. For them to recognize this site as ‘one-of-a-kind’ makes us anxious to get them in front of the skaters who will be using the park.”

Also playing an important role in the design and planning of the skate park will be SGA Architecture, LLC, an award-winning firm of experts on shaping the natural and built environment. SGA has worked with CCPRC and the City of Charleston on numerous projects, including the design of the James Island County Park playground and the streetscape design for the Ravenel Bridge ramps. Other engineering professionals will also be part of the expert team involved in the park’s planning.

Skate park advocates Pour It Now have been major players in the skate park idea coming to fruition, from its original conception. For more information on Pour It Now, visit www.PourItNow.com.

The next phase of the skate park project will include further planning, design, permitting, and construction documentation, which is expected to take at least one year to complete. After that time, construction of the park will begin.

If you'd like to make your opinion heard on the park, the Parks Commission is conducting an online survey.