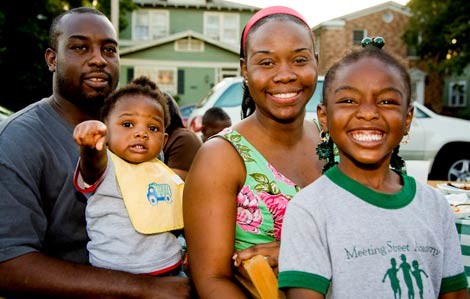 Image by Meeting Street AcademyImage by 20090214-school.jpg Parents and their student at a pot luck for the group back in October.

The City of Charleston has paid $4.75 million to buy 2.4 acres of land for a new K-8 private school. -- Now, before you get to uppity, keep reading.

At first my jaw dropped, too. But I think there are four points why this is a good idea, and the fourth is the most interesting.

One: The land is being leased to the school, Meeting Street Academy, for $10 for 50 years -- so it's just temporary.

Two: The school will cost the group some $9 million to build. And that means a lot of construction jobs, community investment, and education jobs for the area.

Three: The city gets use of gymnasium and playground area after school hours.

Four -- the most interesting: The school already has a preschool, where parents pay only need pledge to participate and pay a $1 a day. It looks like that system would be carried over to the new K-8 school.

The Post and Courier's got both a story on the deal and the existing preschool.

The paper also has some reporting from the day before that gives added context.

The Newsless Courier is decidedly less than thrilled about the project. I've read their criticisms (many of which are quite valid), but I'm still pretty enthusiastic that the project can offer high-grade schooling to those who usually can't afford it.

Update February 14 morning: The Post and Courier has published an editorial on the matter, largely commending the city for the move. Their points largely mirror mine. Go take a look.