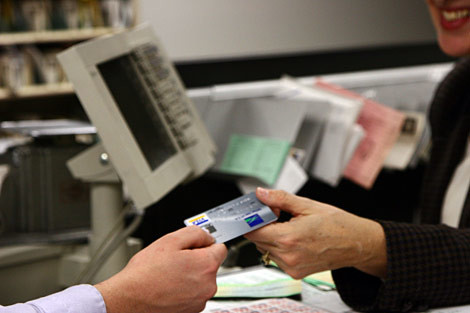 8:47 am on Sunday December 14, 2008 | Posted by Ken Hawkins
A frenzy in Charleston about credit cards and showing ID

Credit cards and merchant demands to show ID: It's a national problem, that also happens to occur here, so generally it's something I'd skip. But given the flurry of back-and-forth in The Post and Courier on the topic, I feel the topic has been a elevated bit.

So, if you haven't followed the issue, here's a quick rundown: The Post and Courier wrote twice about how some area merchants were demanding that customers show ID to use credit cards. The paper said to make such a demand was flatly in violation of merchant's agreements with the credit card companies.

And here's what Visa says on the matter of ID (page 29):
Although Visa rules do not preclude merchants from asking for cardholder ID, merchants cannot make an ID a condition of acceptance. Therefore, merchants cannot refuse to complete a purchase transaction because a cardholder refuses to provide ID. Visa believes merchants should not ask for ID as part of their regular card acceptance procedure.

So, yes, the paper was basically correct.

But, Galen Hudson, of Monster Music/Cats Music, points out that it's not fair to get mad at merchants for taking modest precautions against credit card fraud. Why? Hudson writes:
What happens if, as a merchant, I accept a credit card that is later discovered to be stolen? The cardholder most likely will challenge the charge, and the credit card company will charge it back to me, the merchant. So I've lost product and not received payment for it — not very different from shoplifting.

But a "Merchant Fraud Control Analyst" wrote to The Consumerist that that's not necessarily the case, stating that a signed slip is all that is needed to refute fraudulent charges.

The reality is that both cases probably have truth.

To me, it seems, that the focus on the ID cards is misplaced. If a card is used fraudulently, merchants can be charged back. So, we should be focusing on signatures, as they are the only real security measure on credit cards.

If a customers signature, for whatever reason, does not provide appropriate reassurance, merchants should refuse to accept the credit card, and say that an ID would help reassure them.

In essence, it is not the failure to present ID that prevents payment, but the inadequate (or missing) signature.

But, the reality of the modern world is that many people do not carry cash, and that services are often performed before payment.

What to do? I say show your ID when you can. Most merchants are already having a hard enough time this year, and why not put their mind at ease about charge backs. But, if a merchant wants to record any of your personal information, then that's certainly a matter to put your foot down about.

Credit card rules seem to be outdated and unfairley put both the vendor and user at risk, while putting no blame on the credit card companies themselves.

If the requirement to not have to show state-issued ID is kept, as I believe it should be, credit card issuers should more uniformly add additional security features, namely, photos.

Let's face it, no matter how pretty you are, it's still far too expensive to forge a face.