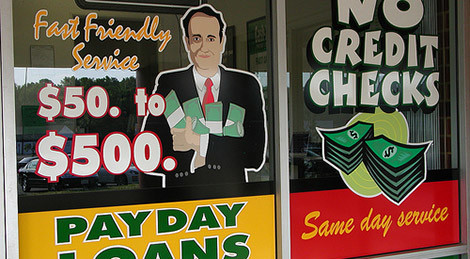 Update January 29: The Indigo Journal talks about how Democrat's are less than thrilled with the new bill (but being that this is South Carolina, they are too few to stop it), the Journal also has another piece that does a solid job rounding up the debate on Wednesday.

First reporting: The State is reporting that a bill that allows payday lenders to lend and charge more is making solid progress through the Legislature.

The State writes:
But a similar number of lawmakers and members of the public spoke out Tuesday in favor of the House reforms, citing the industry as necessary to a struggling portion of the population that has few alternatives.

*Right now folks pay about $15 for every $100 they borrow, but the bill allows that amount to increase.That logic strikes me as ill conceived at best: If I'm barely able to scrape together $600, having to pay at least $690* in a couple weeks is going to be a big problem.

I could see increasing the amount folks are allowed to borrow, but allowing the percentage fee to increase, too, is just bad, bad, bad.

The practice was banned in Georgia in 2004 and withdrawn from North Carolina, and those states seem to be getting by OK without it.

But, look, you don't have to take my word for it that we should be pushing these services out of the state and not embracing them -- they are not a public service.

Proof: The loans "carry fees 30 times the average credit-card rate," according to the Wall Street Journal.

Go get the scoop at The State.