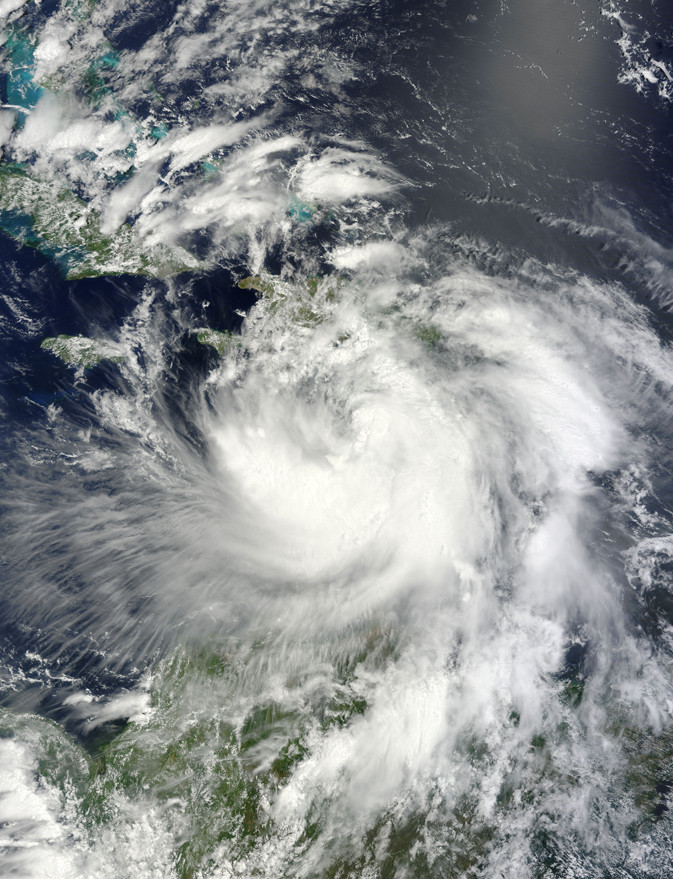 1:51 am on Monday August 27, 2012 | Posted by Ken Hawkins
Lowcountry likely to get doused thanks to Tropical Storm Isaac (Updated)

Image by NASA Goddard MODIS Rapid Response Team An image of Tropical Storm Isaac on August 24 captured by NASA's Terra satellite as it moved through the eastern Caribbean Sea.

Update: The latest forecast updates are suggesting that Isaac will land further west along the Gulf Coast, moving from the Mississippi-Alabama area towards New Orleans.

That means that direct impact to the Lowcountry as Isaac moves inland will be deminshed, however rain is still expected to build over the next several days.

"There is the potential for locally heavy rainfall amounts and minor flooding with widespread rainfall totals of 1 to 3 inches will be possible for the period Tuesday through Wednesday", writes the National Weather Service. "With a 5 day total as high as 3 to 5 inches with locally heavier amounts."

In short, keep that umbrella around.

First reporting: While the brunt of Tropical Storm Isaac's winds will likely fall from Charleston it's looking probable that the storms approach will trigger much precipitation.

Starting this evening and running through Wednesday tropical cyclone Isaac is expected to head northwest through the eastern Gulf Of Mexico and likely making landfall along the Gulf coast late Tuesday afternoon.

"A coastal warm front is expected to extend northeast of this system up along the Southeast U.S. coast pushing through the local area Tuesday into Wednesday and with plenty of deep moisture affecting the area rain chances will be high", writes the National Weather Service. "Locally heavy rainfall will be possible, likely near the coast through Tuesday morning then expanding inland as the warm front pushes through."

There is also expected to be a risk for tornadoes, most likely across southeast Georgia.

Showers start becoming more of possibility early Monday morning with the chance growing as the day pushes on with a high expected near 87.

By Friday night most showers are expected to be gone — but all this, of course, depends on just how accurate a prediction is of a chaotic storm system.

Tropical Storm Isaac's cone of uncertainty as of 5 a.m. on Sunday, August 26.