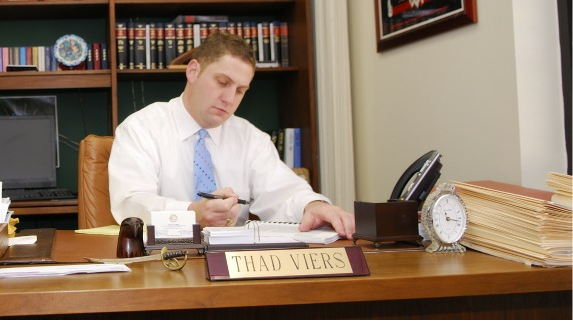 He has been indicted on burgulary charges associated with the stalking case and the victim's apartment. You can read more in this WMBF story.

His resignation comes after his January 2012 arrest regarding alleged harassment of his ex-girlfriend, Candace Bessinger, who is the granddaughter of controversial BBQ restaurant owner Maurice Bessinger. After the arrest Viers withdrew his candidacy for the newly formed 7th district race, which some believe he was a shoe-in for thanks to his endorsement by Governor Nikki Haley.

"Because of this politically motivated situation I find myself in, I must now focus all of my efforts, and I believe therefore I will be unable to faithfully execute the duties of my office and hereby, today, tender my resignation immediately from the South Carolina House of Representatives..."

-Thad Viers, during his resignation. See the video here

According to The Sun News, "State law requires a special primary election followed by a special election to fill Viers’ Socastee-based seat, to take place June 5 and July 24, respectively" which is a whole other issue as The Sun News points out in their piece from this past Wednesday.

The Viers saga is just starting and we'll keep you updated. For a more in-depth and (at times) graphic reporting on the Viers/Bessinger story head over to FITS News.