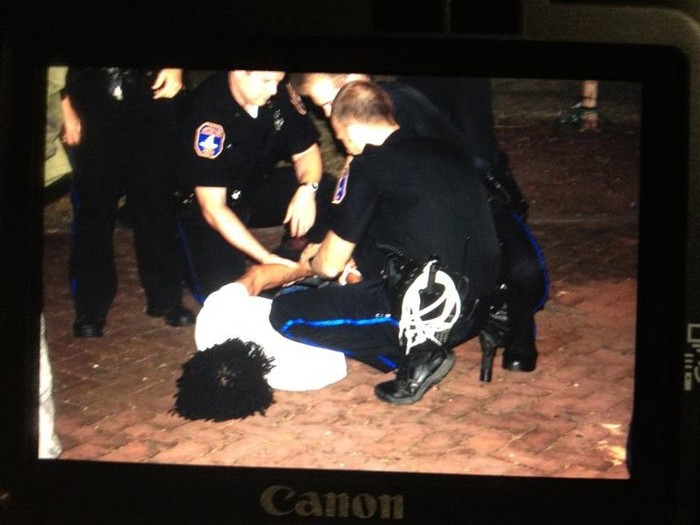 11:25 am on Tuesday January 3, 2012 | Posted by Ken Hawkins
Occupy Charleston: Arrests made in Marion Square (Update: To trial)

Image by Timothy Burnham A photo of an arrest on Wednesday morning, as posted to the Facebook group.

Update February 29: Charges have been dropped against one protestor.

Update January 3: Most of those arrested opted for a bargain in which charges will be dropped as long as they aren't arrested for a similar (or worse) charge during the next six months, but two defendants decided to press the issue of free speech in a park by opting for jury trials.

I'll point you to NBC News 2 for the rundown of what's up.

No word yet on a court date.

Update January 3, morning: The case is slated to be back before a Charleston municipal judge today at 8:30 a.m. — we'll keep you posted to let you know the outcome.

Update December 3: There will be an Occupy Charleston rally today, December 3, at 11 a.m. with a march beginning at noon.

Update December 1: The majority of arrested protesters have been allowed back into Marion Square ahead of the January 3 trial, provided that they stay out of any Marion Square after-hours park protests.

The Post and Courier﻿ and Charleston City Paper﻿ both have solid reports worthy in their own ways.

Update: This battle just got a continuance until January 3.

But expect a skirmish this Thursday, as lawyers representing the Occupy Charleston group ask for a bond modification﻿ allowing the defendants to return to Marion Square — currently prohibited under the terms of bond.

Update November 29: Today is the date for the court hearing after Occupy Charleston protesters were arrested and removed from the park.

The Post and Courier﻿ has a preview of some of the factors involved at the 8:30 a.m. hearing (take a read here) that will weigh heavily on when, if, how, perhaps where protests may take place.

We'll be sure to update you.

Update November 24: In all 10 were arrested and most were released ahead of trial on charges of trespassing.

As part of their release, the judge forbade protesters from returning to the square until after trial.

The Post and Courier﻿ has a nice rundown on the bond hearing and the names of those charged.

If you'd like more gritty detail, there's a number of videos from the night's arrests on YouTube.

First reporting: While there were no arrests during Monday night's occupation of Marion Square, Tuesday night went very differently.

Charleston Mayor Joe Riley followed up on his promise that an "occupation" of the iconic Marion Square would not be allowed and some 11 Occupy Charleston protesters were arrested early Wednesday morning.

﻿(The Post and Courier﻿ has a few more details and ABC News 4 has a small photo gallery.)

We'll be sure to keep you posted as more news on this comes out.

Also, belatedly, if you hadn't followed the November 16th dispersing of (and arrest for some) protesters in Columbia, then here's a nice account of that.﻿