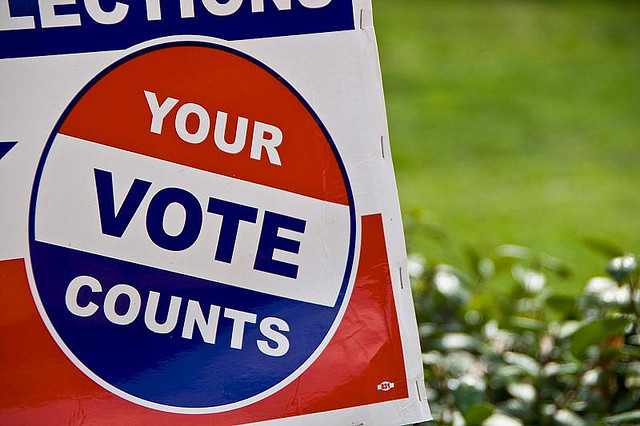 Update 11 p.m.: In state news Wilson and Haley appear to have their seats locked up. As does Tim Scott for the the 1st Congressional District.

For more state results tune into this state results page and these county pages for local races, and head here for national results.

And with that, dear readers, we're going to get some sleep and follow up in the morning.

Poll-closing update: We're headed to the time for results (polls start closing at 7). For national results head to The New York Times: House results, Senate results, governor results, and they even have a nice page for major SC race results. For those from the state get state results here and county-level results here.

Well this is it, the big day across the nation, South Carolina, and the Charleston metro area.

If you're still not sure on how to vote today or need more info on the candidates, check out our roundup from yesterday.

Intro (scroll down for the live part)

We'll be updating here with the most notable information throughout the day. I'll also point you to the #chsvotes and #sc2010 hashtags on Twitter for real-time updates (we've embedded the #chsvotes tag below).

The Post and Courier also has a live blog going, but we decided to go ahead with this one as their is almost a bit too micro in updates. The State has a live blog as well, but that's obviously a bit less local.

Results won't start coming in until at least 7 p.m. when the polls begin to close, as they do we'll mention notable updates here. We'll also be pointing you to South Carolina's official vote tally website, where you can get near-real time vote counts. Also, S.C. ETV will be doing a live results webcast starting at 10 p.m.

As for national results, I suggest you check out The New York Times' centerpiece graphics on the homepage, they usually have the best online presentations out there.

For context, McClatchy has a nice viewers guide to tonight's results on a national scale and what's of significance throughout the night, and what the expected pivotal points are; take a read here.

The upstate U.S. House incumbent John Spratt is one to watch for on a national scale as his seat is battled for as the Republicans try to take 39 House seats to gain control of the chamber. They still need an iffier 10 Senate seats for that chamber.

Update 9:50 a.m.: Polls seem to be going well with an apparent respectable turnout, and The Post and Courier is offering up anecdotal evidence that we'll see near-record mid-term turnout. Expect posts to be slower down here until we hit 5 p.m. or so, unless all hell breaks loose. In the meantime, I'll direct you to the Twitter #chsvotes updates below.

Update 10:55 a.m.: Still sounds like things are moving fine in the Charleston area, but there are reports of voting problems with the electronic machines in Kershaw County near Columbia.

There's also an interesting piece over at The New York Times about how those getting elected now may benefit from an economic recovery already underway. The paper also mentions Nikki Haley.

in part the paper says:"And it’s the politicians who catch the political wave at such fortunate economic moments — particularly governors who get themselves elected during hard times and then preside over the upswing — who tend to establish themselves as folk heroes and turnaround experts, rising to national prominence not just because of their policies but also because of their timing. Which could be very good news for some Republicans like John Kasich, who may yet become Ohio’s next governor, or for an unknown like Nikki Haley, who stands to win in South Carolina." Read their full report here.

Update 11:10 a.m.: The New York Times has added a post that details their planned election night coverage and how they'll roll it out starting around 6 p.m. Part of that includes state-by-state pages with breakouts. Here's the South Carolina page, while it doesn't off local and Statehouse race info, it's a bit more user friendly than the more detailed state results page from SCVotes.org.

Update 12:30 p.m.: Freebies! Vote and you'll get various freebies around town, here's what we've found so far if you bring your "I Voted" sticker:

Have more? Let us know in the comments or tweet us at @TheDigitel.

Oh and if you're wondering if Starbucks or other national retailers are doing freebies this year, alas they're not.

Update 3:45 p.m.: Polling places appear to be running relatively smoothly with the occasional report of a long wait. In general turnout appears to remain high in the metro area, seeming more akin to a presidential election than a mid-term one.

It's something we'll watch as the results come.

Update 5:15 p.m.: We're under the 2 hour mark until polling spots start closing. So pick a good watching spot for the results to start coming. -- And on that note I'd like to point out a few links: Get state results here and county-level results here. We'll also be updating this page with bigger wins/leanings.

On a national level The New York Times has many graphics being offered, including their state-by-state pages with breakouts. Here's their South Carolina page. For context, McClatchy has a nice viewers guide to tonight's results on a national scale and what's of significance throughout the night, and what the expected pivotal points are; take a read here.

Update 5:40 p.m.: As we start to look towards the results, I'd like to point out two more of the Times' graphics for the Senate and House seats that show what seats are in play and which are leaning: House graphic, Senate graphic. -- But it doesn't look like those will be updated, for results: House results, Senate results, governor results, major SC race results.

Update 7:55 p.m.: With some long lines some South Carolina polls have had to stay open late and we're just seeing results beginning to trickle in.

The S.C. site is behind but the N.Y. Times has data coming in already, but less than 1% is reporting at this point.

Update 8:23 p.m.: Results continue to trickle in with about 4% reporting, mainly in the midlands, the coast and upstate have yet to report much ... the race has been called for Jim DeMint, Sheheen and Haley running neck and neck, Wilson leads Miller handily but it's mainly Lexington that has yet to report in the second Congressional District.

Update 8:39 p.m.: Results in S.C. continue to trickle in slowly. If you're hanging on every blurb of election news (and not getting paid for it), we suggest a walk, shot, and come back in an hour.

Also, S.C. ETV has started their broadcast online, but they seem to be having some technical difficulties; watch here.

Update 9 p.m.: Haley and Sheheen continue to be neck and neck with 23%. The mere fact this is holding close is shocking considering where polls were a couple weeks ago.

Republicans have picked up six seats in the House so far and networks are predicting that they have won control of the House.

Update 9:14 p.m: The lower midlands is starting to come in and this has bumped up Democrat Rob Miller and Vincent Sheheen with sizable leads. We'll see how long that holds.

In national news, the GOP has picked up one senate seat and eight House seats -- they'll need 39 House seats to get control.

Update 9:18 p.m.: CNN has just called control of the House for the GOP.

Update 9:22 p.m.: With 33% reporting, Sheheen and Miller maintain their leads.

Also, the four constitutional questions look likely to pass. The reserve funds have +70% approval, the right to private ballots have 84% approval, and hunting/fishing question has 89% approval.

Update 9:43 p.m.: Dorchester County has 60 of 74 counties reporting, get the results here.

Still waiting on detailed reports for Berkeley and Charleston. Though it looks like Sunday alcohol sales have passed in Berkeley.

Update 10:09 p.m.: The governor's race is a dead heat for now, but Haley appears to be pulling away, but that could yet reverse.

Also, Republicans appear to be domination in most of the other state offices: Lt. Gov., Secretary of State, Attorney General, Comptroller General ... but the Superintendent of Education remains a dead heat.

Update 10:20 p.m.: The race for governor and House District 2 remain tight, but with conservative Lexington County only at 11% reporting later in the game, that's bad news for the Democrats.

We continue to wait on detailed reports in Charleston and Dorchester counties.

Update 10:40 p.m: NBC is calling South Carolina for Haley, and the AP is calling House District 2 it for Joe Wilson.

Update 11 p.m.: In state news Wilson and Haley appear to have their seats locked up. As does Tim Scott for the the 1st Congressional District.

And with that, dear readers, we're going to get some sleep and follow up in the morning.