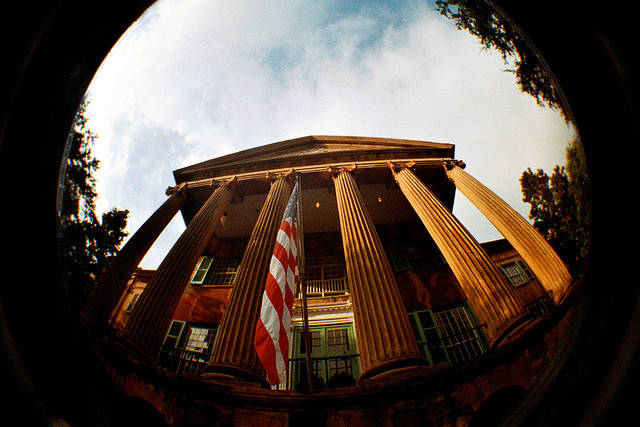 The College of Charleston Board of Trustees voted today to decrease in-state undergraduate tuition to $4,808 for the Spring 2011 semester.

The move follows a pushback by the State of South Carolina on skyrocketing tuition rates in the state. The school's move means that the College’s 2010-11 tuition now represents a 7% increase over 2009-10, which will allow the college more freedom over its purse strings.

(Update November 14: If you'd like another write-up with a few more details, check out The Post and Courier's.)

More details and quotes on the news from a press release is below and you can get more background on our topic page.

“The Board of Trustees understands the concerns that have been expressed by our legislators and the difficult choices that have to be made in our current economy,” said Board of Trustees Chair Greg Padgett. “The timeline for implementing certain strategic initiatives will now have to be extended, but the Board recognizes the need to be proactive and collaborative in working with our elected representatives to find solutions that will make high-quality, affordable education available to South Carolina families.”

“In making its original decision on tuition for the current year, the Board of Trustees very carefully considered the need to provide funding for important priorities within the College’s new Strategic Plan, which is designed to enhance the educational experience of our students, and to restore a portion of the $16 million in state funding cut since 2008,” Padgett added. “This year’s tuition was initially set at a level that would allow the College to achieve these objectives. The debate about higher education funding, however, caused the Board to reconsider this decision. The Board will continue to work to find long-term solutions to the budgetary issues facing higher education institutions in our state.”

The tuition reduction will result in a mid-year budget cut of $2.3 million, and a potential annual cut of $4.6 million. In addition to postponing Strategic Plan initiatives, the leadership of the College, which is conducting a comprehensive quality and efficiency study, will undertake an analysis to identify areas in which budgets can be cut. Mission-central areas that will be affected by the decrease in tuition include ability to fund faculty and staff positions, ability to enhance financial aid, ability to pursue new capital projects, and ability to fund technology improvements.

“Despite this significant budgetary setback, the College will this fiscal year keep in place the new pool of financial aid created by the original tuition increase,” said College of Charleston President George Benson. “As part of our strategic planning process, we provided a 25 percent increase in the financial aid supporting our students for the current academic year.”

“Although we have received overwhelming support for our original tuition rates from College of Charleston faculty, staff, students, and supporters, these groups recognize that the Board of Trustees is working under difficult circumstances to ensure the long-term best interests of the College,” Benson said. “In addition to tuition, there are a number of critical issues facing the College and higher education in our state. We hope for a meaningful dialog with state leaders as we work to address mutual concerns about the funding and state regulation of higher education.”