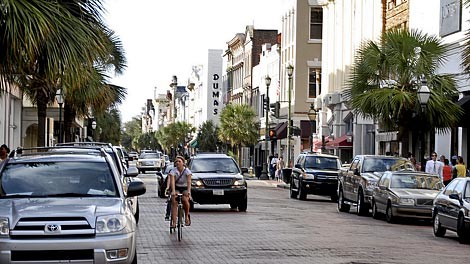 Image by Geoff Marshall/TheDigitelImage by 20081119-bike.jpg Going with traffic, riding single-file?! Madness! Lack of enforcement has also encouraged bikers to ride erratically and dangerously even when responsible drivers attempt to drive defensively.

Hence, downtown Charleston, especially, has become a carnival ride of unprecedented liability where bikes ride through red lights, in and out of parked cars, on the sidewalk to the street and back again, etc., with absolutely no consequences as long as they don't get run over while some vehicular drivers take a "WWE Smackdown" attitude by seeing how close they can come to scaring bikers off the road.

I find myself largely agreeing with his assessment of biking through downtown as a sort of Wild West experience, with a couple sizable footnotes that aren't addressed by Whitt:
In some parts of the city it's near-suicide to be bicyclist. If it's not the cars it's the 4-inch drops that are the storm drains.
There's a city ordinance against biking on the sidewalks, not that anyone could be expected to know that as you regularly see city bike police on the sidewalks.

Of course if the city made cyclist follow the rules, they'd have to make changes to the roads to better accommodate bikes.

As Whitt puts it:
We can share the road safely, but it won't happen without a plan or at least some discussion. ...

Bikes may not always be the preferred method of transportation, but there's no reason to make it such a deadly alternative.

At any rate, Whitt's letter is a worthy read.

Update November 19: I missed this editorial in the paper in response to Whitt's letter.

All-in-all The Post and Courier backs up Whitt's call for enforcement of bike laws and greater accommodation of bikes in city plans.

But, the paper fails to call out the city police for not obeying the city's own rules about bikes. I regularly see bike cops on King Street's sidewalks or coming down a road and, upon hitting a red light, hook a left onto the sidewalk.