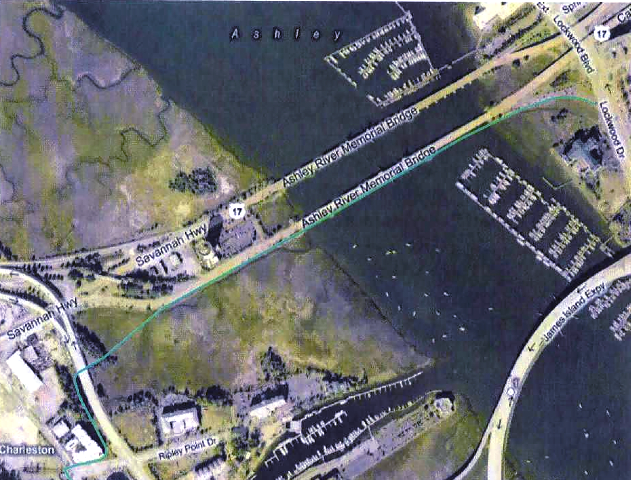 Update December 17: A project once thought unlikely to win approval from the bridge's owner, the SCDOT, has been approved.

However, the City of Charleston has yet to estimate a total cost, timeline, or intersection impact for the project that will convert one lane of traffic on the eastbound bridge for use by runners and cyclists.

For what little more exists on the advancement, I'll point you to The Post and Courier﻿'s report or Charleston Moves' release.

Update September 1: While far from a ringing endorsement, where the former leader of the S.C. Department of Transportation ﻿was opposed to such ideas, the proposition of converting a land of the Ashley River bridges to bike and pedestrian traffic has received a timid welcome.

I'll point you over to The Post and Courier﻿ for the rundown of the meeting; read it here.

Update August 16: It's been some months since there was movement in the effort to find a pedestrian and bike friendly crossing from West Ashley into downtown Charleston.

During that time, North Charleston has begun to explore a crossing on the World War II Memorial Bridge and sad news has come of a biker that perished after being struck on the James Island Connector.

But hopes of converting a lane of traffic on the southern, northbound bridge that heads into downtown Charleston are well alive and plans are due to be unveiled today.

The Post and Courier﻿ has a robust rundown on what's up (read the report here.)

Update February 17: The Charleston City Paper's Web guru Joshua Curry has a video recording of the bridge crossing from the front of his bike's handlebars.

It gives you a real feel for how narrow (and shaky) the experience is; watch it here.

Update February 4, pushing forward: The Post and Courier reports that the resolve for the city is still there to make some sort of bike-pedestrian friendly crossing.

And so the city is asking SCDOT once again to study taking away a lane of traffic from cars.

Read the paper's report here — it also details the level of effort the city went through studying the parallels crossing option.

First reporting, January 31: A long-sought method of allowing for safer pedestrian and bike crossing of the Ashley River into downtown Charleston has just hit a huge roadblock.

The Post and Courier is reporting that an engineering study on adding a parallel structure to the southern T. Allen Legare Jr. Bridge has shown that it would just be too heavy to allow the drawbridge to open.

Read the paper's report here — it also discusses an alternative and controversial idea to remove one lane of traffic and devote it to non-vehicular traffic.