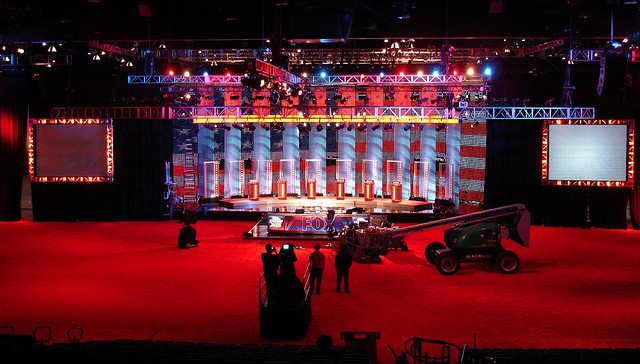 Flickr user Teresa
Construction of the set for the FOX News hosted 2008 Republican debate at the Myrtle Beach Convention Center.

Update 12/2: The GOP Presidential debate scheduled to take place in Myrtle Beach on Monday, January 16th is officially a Go.

The details have been hammered out and the debate will take place at the Myrtle Beach Convention Center. The previously scheduled Volleyball tournament has agreed to relocate.

For all the details hop on over to The Sun News, as a reminder, also on that weekend is the first ever South Carolina Tea Party Convention.

That's about all we know for know. See The Sun News update for a couple more details.

First Report: Despite some recent bad press, the Myrtle Beach Area Chamber of Commerce had a big coup this week with confirmation from FOX News that a Republican presidential debate will be held in Myrtle Beach.

The debate will take place on January 16th but there is some confusion over where it will be held. Just going off the press release from FOX, WPDE reported that the event was going to happen at the Convention Center. Read that here. But WBTW said it was definitely taking place at the Palace Theater. Read that here. Finally, The Sun News had a longer write-up that confirms we really don't know where the event will happen except in Myrtle Beach somewhere. That's here. Curiously, WMBF didn't have any online coverage of this story.

But what really matters to local leaders is that the debate will happen in January and it will bring a lot of visitors to our area during a traditionally slow business period. In 2008, Myrtle Beach hosted both Republican and Democratic presidential debates creating an estimated $10 million in publicity value for the area. Read more about that in this older article from The Sun News.

According to FITS News, CNN will host a Republican presidential town hall in Charleston just 3 days after the Myrtle Beach event.