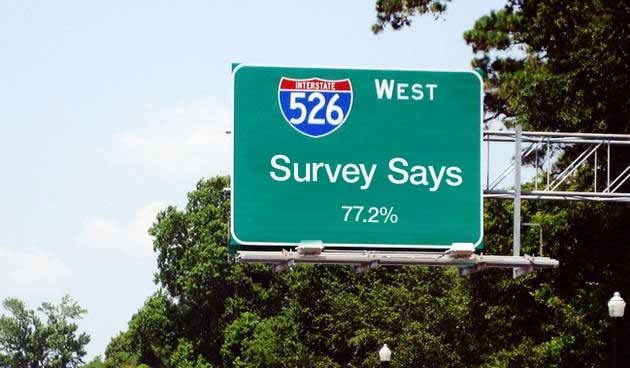 As the debate over extending I-526 through John and James island continues, a new facet is entering the debate: a public opinion poll.

Weighing counter to the hundreds of impassioned opponents to the road that turned up at public meetings, a survey of households in proximity to the road project says a majority support the road.

Sure to incite concerns of bias is that the survey was commissioned by the S.C. Department of Transportation — a group who is advocating the completion of the road. The survey was conducted by the University of South Carolina's business research program.

Meanwhile supporters of the road project have already sent out press releases lauding the survey results.

A meeting of SCDOT commissioners is due on September 20, and detractors are hoping the project could be derailed then.

Here are details on the survey results and methodology:

Overall, 72.2% of respondents in the target area favor building the extension of the Mark Clark Expressway along this proposed route and 27.8% are opposed. Not only does a significant majority of adults in this area support this proposed extension, but a majority of each group examined in this study does as well.

Men were more likely than women to favor the extension of the Mark Clark Expressway along the proposed route, 78.7% to 67.4%. Although a lower percentage of women than men supported the proposed extension, approximately two-thirds of this group indicated that they favored it.

Differences across races were statistically significant, but a majority of each group was in favor of building the extension: 81.8% of African-Americans, 70.2% of whites, and 65.3% of those of other races indicated that they favored building the extension of the Mark Clark Expressway along the proposed route.