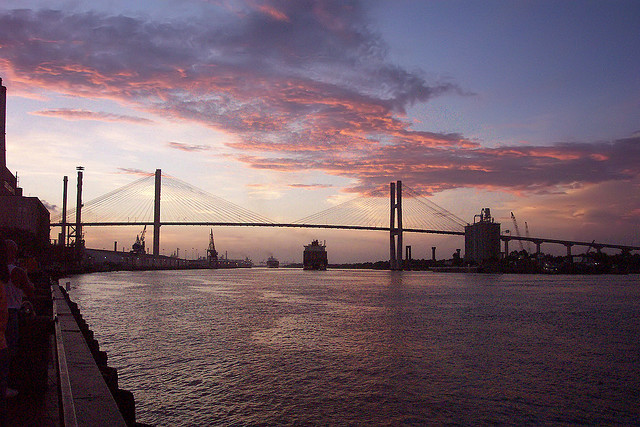 2:46 am on Friday December 9, 2011 | Posted by Ken Hawkins
S.C. goes to war on self, following deal to deepen the Savannah port (Update: Fire on Haley)

Image by Flickr user .:[ Melissa ]:. The Savannah River seems to be running red these days.

Update December 9: With a 7-3 vote, senators cleared Gov. Nikki Haley's staff of any undue influence in the Savanna port-gate.

But many of the Senators still believe that Haley herself had a hand in getting the DHEC board to reverse the denial made by DHEC staff.

I'll point you to The Sate's report for the rundown.

Also worth noting is that environmental groups are getting involved in the fray and challenging DHEC's reversal. Additionally, the growing animosity and Legislature's mistrust of Haley seems likely to keep growing.

Update December 2: The Post and Courier﻿ is reporting that senators have voted to subpoena ﻿some members of Nikki Haley's staff about the port dredging reversal.

Update November 29: Haley defended her self vehemently, but the half-hour press conference seems to have change few minds ahead of today's Senate hearing on the DHEC port permit.

Many reports abound on the press conference, but my preferred is a compilation one over at The Island Packet near Hilton Head (take a read here).

You can also watch Haley's remarks for yourself in this video or read just how ticked off some pundits are.

Update November 26: No new developments ahead of Monday's press conference by Nikki Haley, but there's some excellent context on the factors in the game over in a column at The Post and Courier﻿; take a read here.

Update November 25: Gov. Nikki Haley is taking a lot of flack on this — allegations run from she's just in the wrong, to she unduly influenced SCDHEC to green light the dredging, to folks saying that she changed her mind only after getting a cool $15,000 at a Georgia fundraiser.

I'll point you to The Post and Courier﻿'s report for the details; take a read here.

Update November 16: As you might expect, on Tuesday Gov. Nikki Haley defended the actions of the people she appointed to the board of SCDHEC in approving the port permit as fair and not having been influenced by her.

Still, far from everyone is happy that she's not putting up more of a fight against the Savannah port.

Update November 15: Well, it's not just Sen. Tom Davis that didn't care for the deal — a lot of folks are unhappy and there's already more than a bit of political infighting.

The Post and Courier﻿ nails what's happening and the absurdity, with this lead (emphasis added): "The Savannah River is the battle line in what one lawmaker calls 'this war between Savannah and Charleston,' but all the fighting is happening on the South Carolina side.﻿"

In a nutshell, folks seem peeved that South Carolina is giving up leverage with the deal to approve the deepening of the Savannah River (never mind if the deepening will actually harm water quality).

And now the Savannah River Maritime Commission is challenging SCDHEC's decision in a way that appears headed to court, ﻿and S.C. Attorney General Alan Wilson is already backing up the group.

In fact, there's already a fair bit of finger pointing against Gov. Nikki Haley for pushing SCDHEC to make a deal.﻿

Haley is addressing S.C. port supporters in Charleston today, so expect further development after that.

First reporting: Remember the deal that was struck between the S.C. Department of Health and Environmental Control﻿ and Georgia for environmental approval of port-deepening plans?

Well, S.C. Senator Tom Davis (R) doesn't care for it — he doesn't like how the deal was struck or how the deal has eliminated much leverage South Carolina has had over how the port deepening could proceed.

Here are his thoughts:

I think today's decision by the DHEC board to issue a water quality permit in connection with the Savannah Harbor Expansion Project (SHEP) was the wrong one for two primary reasons.

First, the DHEC board's decision undermines the excellent work that has been done the past few years by the Savannah River Maritime Commission, a commission that by law has the plenary power of the State of South Carolina as to all matters involving the use of the Savannah River for maritime commerce. The maritime commission was created so that the State of South Carolina could speak with one unified voice in such matters, yet the concerns it expressed to the DHEC board about SHEP, in general, and the water quality permit, in particular, were ignored. The DHEC board and staff should not have been negotiating a deal with the Georgia Ports Authority and the Corps of Engineers when that power clearly lies with the maritime commission. At the very least, members of the maritime commission should have been at the table; they have been involved in this matter on the state's behalf for years, as opposed to weeks.

Second, as a result of the DHEC board decision, the State of South Carolina has lost a great deal of the leverage it had to insist that the United States Army Corps of Engineers: a) consider the Jasper County port site as a less costly alternative, in both monetary and environmental terms, to dredging 30 miles of the Savannah River; b) modify the SHEP dredging plans so that the Jasper County port site receives the improvements it needs to handle maritime commerce; and c) release the spoil easement that presently encumbers the Jasper port site – the roadblock to its immediate development by the private sector with private capital. The last point merits special emphasis since Congress has directed the Corps to release the spoil easement, and that directive has been ignored by the Corps.

Given the tremendous leverage the State of South Carolina had over the State of Georgia in this matter, it was entirely possible, even likely, that a comprehensive agreement could have been reached between the two states not only in regard to SHEP and the development of the Jasper port site, but also in regard to other areas of interest concerning the Savannah River. For example, the Savannah River provides potable water for Beaufort County and the surrounding counties, as well as for other SC counties further up-river. The City of Atlanta has made known its interest in tapping the Savannah River in the future to meet its potable water needs, and a water battle between the two states is looming. That could have been on the table and resolved, as could the Total Maximum Daily Load issues.