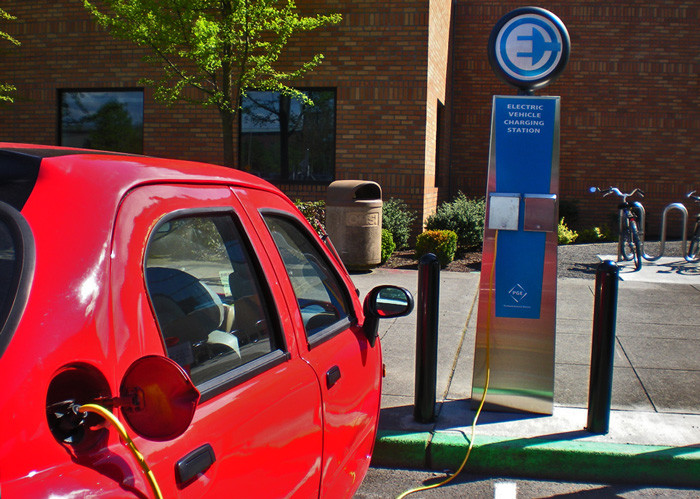 Update October 26: The three stations are online and buzzing with electricity for those of you with electric cars.

Right now the only ones online are at the city garage at 75 Calhoun Street, but the Visitor Center and Queen Street garages will have some soon — in all the Charleston will have ﻿eight stations downtown.

The Post and Courier﻿ has a write-up with some details about the program.

Update October 25: Almost two years on since word first came that six plug-in stations would be set up, they're starting to come online.

Plug-ins for electric cars have been installed in three City of Charleston parking garages. Mayor Joe Riley, Jr., Jim Poch of Plug In Carolina, and Time Keane Director of City of Charleston Department of Planning, Preservation and Sustainability will demonstrate the chargers today, October 25.﻿

Update December 23, 2010: The Post and Courier has started talking up the six or so electric car charging stations that are soon to be installed in Charleston parking garages.

The initiative is costing about $52,000, but once the stations are set up, the city estimates that it should cost less than $300 in 2011 to provide the free power and about $500 in the third year of the initiative as the number of electric vehicles grows.

For more on how the city is going electric, hop over to the article in today's Post and Courier.

Update November 22, 2010: Well, this story had gone dark for some time but the news is alive again with stations are being put in across the state to help make all-electric cars more accessible.

For more on what's up, The Post and Courier has a refined report over here or you can head over to the Plug-In Carolina blog for more micro updates.

First reporting January 9, 2009: Boasting of a fuel cost that is 75% less per mile, Plug-In Carolina has announced a $240,000 grant that will allow for eight public car-charging stations in Charleston, Columbia, Greenville, and Spartanburg.

That's a total of 32 stations that will act as additional charging points when the user is away from home.

The Post and Courier chatted with the man behind the scenes, Jim Poch, and has the scoop on what's going to happen; read it here.