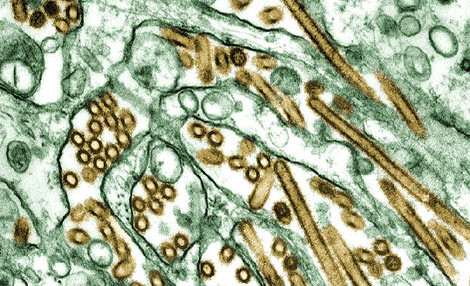 Image by Centers for Disease ControlImage by 20081005avianflu.jpg The fear-of-god striking avian flu is show in gold. There are fears it could soon easily flow in humans.

Some 60% of reported flu cases in 2007-08 were caused by strains not targeted by the vaccine manufactured for to fight last year's flu.

Dr. Robert Ball, an epidemiologist with the S.C. Department of Health and Environmental Control, and other health scientists ponder the possibility of a new strain of influenza that could potentially wipe out thousands if it arrives.

The Post and Courier describes this potential epidemic:
A worst-case scenario could kill up to 25,000 South Carolinians. The sick would overwhelm hospitals, absenteeism would close businesses and food supplies would slow.

It's a classic scare, but one that is mostly dodge-able with some simple precautions: Fervently wash those hands, and go get your flu shot (the state has a list of where flu clinics are being held). Antibacterial can save lives. Every year health science departments flirt with predictions of global pandemic, so don’t worry too much. Just make sure to take proper precautions.

Head over to The Post and Courier for the 'flu' story.