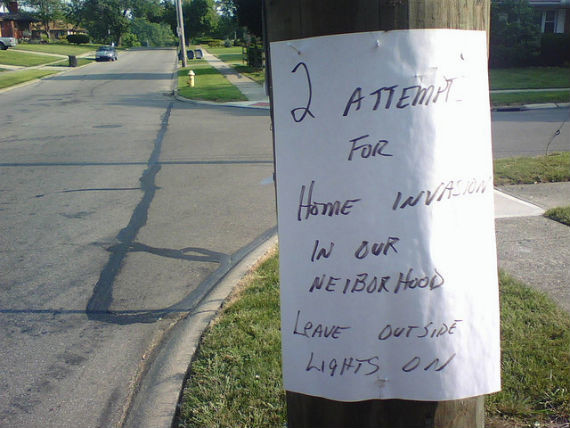 Image by Flickr user danieljohnsonjr You could just leave your lights on as this sign suggests...or you could take a cue from the Moncks Corner homeowner and arm yourself with a pistol.

Update April 29: The family of Bobby Gadsden, the deceased burglary suspect that was killed during a home invasion, say that police have been misleading regarding the case.

The family is requesting that federal authorities intervene and investigate. Gadsden's uncle, Tyler Williams, and a family advocate, Zoe Spencer, have laid out a list of what they claim are inconsistencies in what they have been told by police.

The Post and Courier has more details on these so-called inconsistencies; check 'em out here.

Update April 19: After week-long investigation, the details are finally in on what exactly played out during the Moncks Corner home invasion which left one dead and landed two in jail.

The deceased home intruder has been identified as the well-liked 21-year-old former Berkeley High School football star Bobby Gadsden who died from a single gunshot wound to the back of the head.

The Post and Courier's article points out the family's anger over originally being told Gadsden was shot in the chest and Berkeley County Coroner's declination to request an autopsy due to the circumstances of his death. It also mentions the "Justice for Bobby L. Gadsen" Facebook page, created by Gadsen's uncle, demanding answers.

Get the update here.

Update April 14, 11:37 a.m.: A third suspect has turned himself in in connection with yesterday's home invasion.

News 2 Charleston reportsthat Tyler McCoy, the getaway driver, is in custody at the Hill-Finklea Detention Center in Berkeley County.

Update April 14, 7 a.m.: The Post and Courier﻿ has followed up with a flushed out report with a few more minor details and context.

You can read it over here.

Worth noting is the vehement denial of looking into charing the homeowner by Moncks Corner Police Lt. Wendell Bowen.

First reporting: One man is dead after police say he was found along with another suspect in a Moncks Corner residence﻿.

The scene was at 1404 Cooper River Boulevard, where the resident said that he heard a noise inside his home and, after spotting the invader, fired a pistol at the dead suspect. The man was pronounced dead at the scene, from a single gun shot.

A second invader ran from the house and was found by police less than an hour later.

Get the full details over at the Post and Courier.