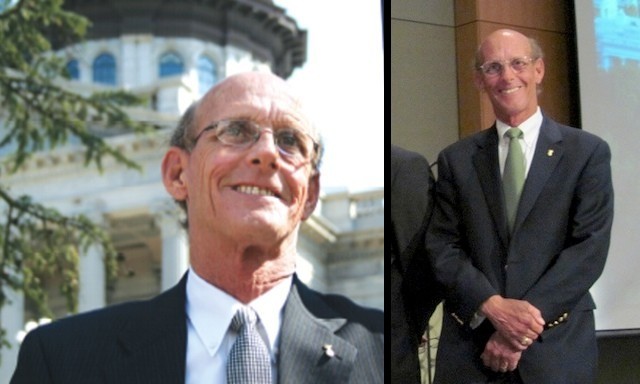 Update April 26th, 2012: Rachel Duncan gave an exclusive interview with The State that goes into detail about why she did not come forward during the investigation.

The State also reports that Sponseller had photos of Duncan on his computer that were "sexual in nature." However, Duncan states she never gave any photos to Sponseller. The details are here.

See our previous reports below for backstory.

Update March 25th, 2012: The State newspaper has a write-up regarding the unaddressed letter found in Sponseller's desk.

The letter (below) describes how Rachel Duncan, the fired Hospitality Association’s former Director of Finance and Membership Records﻿﻿ confessed to Sponseller to taking the money to pay off online gambling debts.

Update February 29, 2012: Police only found Sponseller's body due to the employees at the S.C. Hospitality Association breaking into his locked desk drawer and finding a three-page letter.

This discovery is what triggered the fourth search of the building and ultimately the discovery of the 61-year-old Sponseller. The details of the letter have not been released. ﻿ This whole situation has caused many to criticize﻿ the Columia Police. Today's article in The State reveals all the details of the investigation. Read more here.

As far as local reaction, The Sun News has a write-up and WMBF also has a short brief.

Update February 28, 2012: Unfortunately, the news is not good in the story of missing S.C. Hospitality Association President, Tom Sponseller.

He was found dead in a Columbia parking garage, having suffered from a fatal self-inflicted gunshot wound.  You can read more in this article from The State. FOX News also reported on the discovery and adds that the cause of death appears to be from a self-inflicted gunshot wound to the head. That link is here.﻿ There's no word yet on when the apparent suicide may have occurred.

Brad Dean, president and CEO of the Myrtle Beach Area Chamber of Commerce, offers the following comments in response to the announcement of Tom Sponseller’s death:

“Our board and staff are saddened to learn of the death of Tom Sponseller. The friends, family and coworkers of Tom Sponseller are in both our thoughts and prayers, and our hearts go out to them during this tragic time.

Tom’s dedication to improving and assisting South Carolina’s leading industry was evident to those who worked closely with him. We will always remember Tom’s hard work, commitment, and the positive impact he had on the South Carolina hospitality and tourism industry.”

Update February 24, 2012: Today a report published by The State digs a little deeper into the former employee we mentioned in our last update.

Investigators did confirm some of the FITS News information (see prior report below) that "substantial" amounts of money has gone missing from the S.C. Hospitality Association coffers and Rachel Duncan is considered a person of interest for possibly embezzling the funds. However, Duncan has not yet been charged and it hasn't been confirmed that she was fired from her position at the Hospitality Assocation. She has also been communicating with law enforcement while they search for Sponseller, according to her attorney. The State has more information and details here.

Update, February 23, 2012: On Wednesday a candlelight vigil was held at the State House and today FITS News says what some folks are already thinking.

More details on the vigil and a full timeline of events are available from The State. That's here. The write-up also reiterates the cautious way police are handling the case. They have asked Sponseller's co-workers to not discuss anything with the media. This purposeful management of details may be protecting vital leads in the investigation. But it's also just human nature to wonder and speculate on what could have happened to Tom Sponseller.

Looking at the currently known facts, it appears unlikely that Sponseller disappeared under his own free will. That begins to beg the questions of who and why anyone would abduct Sponseller. Obviously the political nature of his job and his deep involvement with our state's most lucrative industry raises questions.  At this point, any story that ends with Sponseller turning up alive and well would be a good one. ﻿The infamous "Appalachian Trail" Sanford incident is still fresh in our minds as it was only a couple years ago. Even in that case, ﻿Sanford was still in communication with his office about his departure. The Columbia-based FITS News has received tips from protected sources that the disappearance may involve a former employee. FITS is gathering tips and developing their story here.

The State has an updated story that only reveals a few more details. Policed have not yet disclosed the progress or results of electronic records searches, security camera recordings, or GPS tracking of his iPhone. They did mention that Sponseller's business office was in tact as he had left it. They have declined offers by volunteers to form search parties. You can read more from The State here-

Being such a tourism based economy, Sponseller's disappearance has hit close to home for many Myrtle Beach-area locals.

First Report: Tom Sponseller, President of the S.C. Hospitality Association, was reported missing by his family on Saturday.

Sponseller was last seen on Saturday afternoon and his car is not missing. Police have not ruled out foul play. Any tips should be called into Midlands Crime Stoppers at (888) CRIME-SC or the Columbia Police Department at (803) 545-3500﻿. The State has more details here.

The S.C. Hospitality Association is a lobbying group representing over 2,000 food service and lodging member businesses.  Sponseller was just in Myrtle Beach recently for the food and beverage trade show at the Myrtle Beach Convention Center.