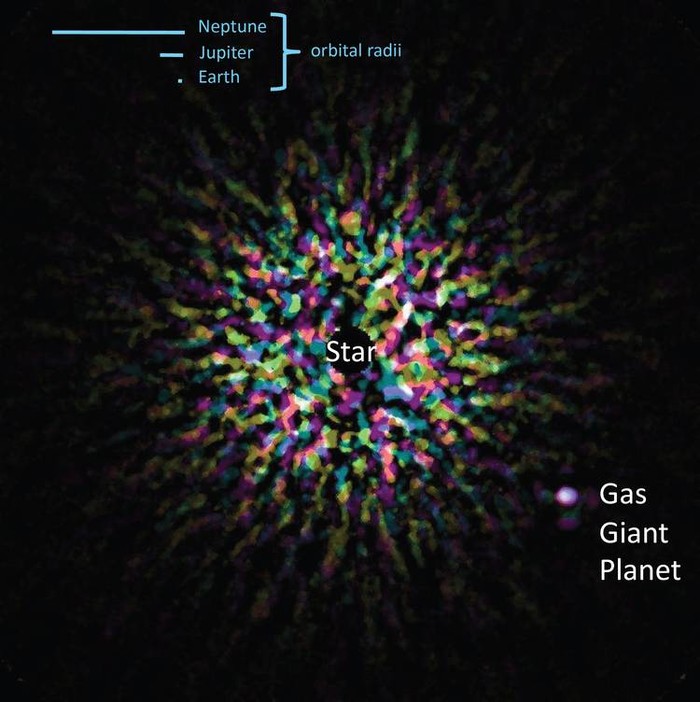 7:17 am on Saturday November 24, 2012 | Posted by Ken Hawkins
College of Charleston professor, students get direct observation of extrasolar planet

Image by College of Charleston

Detecting a planet orbiting a sun trillions upon trillions of miles from earth is hardly average, but a College of Charleston professor and group of undergraduate research students have done something even less common.

They managed to get a direct image of it.

Granted, we're not talking about a Blue Marble quality image, but it's still unusual to get a direct image.

The college writes, "To put the discovery in perspective, of the nearly 850 extrasolar planets – planets orbiting stars other than the Sun –currently known, only a minute fraction have been captured in actual astronomical images. The vast majority of detections rely on indirect methods."

You can see that image above.

Here are more detail from a relase:

Two College of Charleston undergraduate research students, part of a team led by Professor Joe Carson, analyzed images from one of the world’s largest telescopes and identified a new extrasolar planet. Through careful processing of the images, they achieved a direct image of the faint object. To put the discovery in perspective, of the nearly 850 extrasolar planets – planets orbiting stars other than the Sun –currently known, only a minute fraction have been captured in actual astronomical images. The vast majority of detections rely on indirect methods.

“Just discovering a new extrasolar planet is exciting,” says Carson, an astronomy professor who also works with the Max Planck Institute for Astronomy (MPIA). “But, under these circumstances, with the direct involvement of undergraduate researchers, it is particularly exciting. Thea Kozakis and Laura Stevens analyzed the raw data from the telescope and identified the candidate exoplanet in their final, processed image. They nicknamed the planet ‘Derek’, which is still what we call it in our group meetings at the College of Charleston.”

Following Kozakis’ and Stevens’ initial results, Carson’s team carried out follow-up observations to confirm its identification.  Kozakis and Stevens analyzed the follow-up data and confirmed that the faint object was an orbiting companion of the star, and not an unrelated background star. Based on their positive results, Carson worked with his collaborators from around the world, including MPIA, NASA Goddard Space Flight Center, National Astronomical Observatory of Japan (NAOJ), and Princeton University, to characterize the planet with additional follow-up observations, and to carry out optimized re-analyses of the original data.

The discovery of  κ And (kappa Andromedae) b, as the planet is called, was made using the Subaru 8-meter telescope on the summit of Mauna Kea in Hawai’i, operated by the National Astronomical Observatory of Japan.  The observations were carried out as part of the Strategic Explorations of Exoplanets and Disks with Subaru, led by Principal Investigator Motohide Tamura (NAOJ).

Carson explains the significance of being able to get a direct image of the exoplanet. “With a direct image, the planet is immediately accessible for myriad follow-up examinations such as spectroscopic analysis. Such studies can reveal detailed information on the planet’s atmospheric chemistry and dynamics. Among other benefits, this allows us to compare the planet’s atmospheric features with those of our own solar system planets.”

Carson also notes that the kappa Andromedae system is also unique because the Super-Jupiter has an orbital separation similar to that of our own solar system’s outer planets. That suggests that the kappa Andromedae planet formed in a manner similar to that of lower mass planets. It is by far the most massive star to show strong evidence of this type of planet formation. There are some other stars that are equally massive and have known planets, but these other planets are either in extremely wide orbits, well beyond those of the Solar System planets, or exist around stars that have already reached the end of their normal nuclear-burning lifetime.

The discovery of the Super-Jupiter κ And b suggests that stars as massive as 2.5 solar masses are still fully capable of producing planets within their primordial circumstellar disks – key information for researchers working on models of planet formation.

Carson’s research is funded by the National Science Foundation (NSF) through a $286,568 grant.

Watch a video of Carson talking about previous discoveries.

Read an article in the College of Charleston Magazine about Carson.