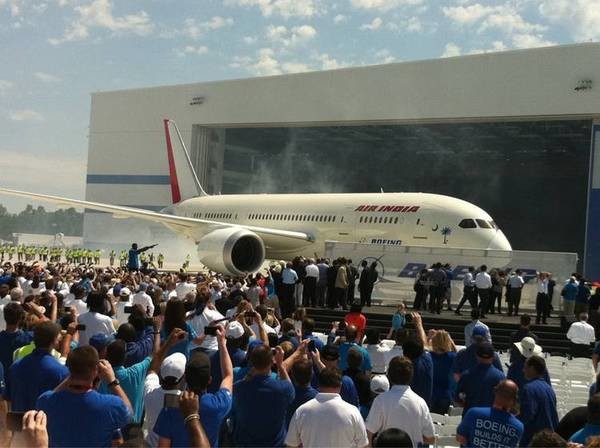 Update May 23: In a tweet, Boeing has announced that the 787 Dreamliner is expected to fly today.

Update May 16: The first North Charleston 787 Dreamliner has been complete since April, but it's expected to take to the skies on Friday, May 18.

Boeing is setting to fly the first Charleston built 787 this Friday. Randy Neville, a Boeing 787 test pilot fresh from the 787 World Tour flew ZA003 from St. Louis today then left for Charleston in order to take ZA237 (LN46) on its first flight scheduled for May 18th. Randy was on ZA001 when it went up on its first flight on Dec. 15, 2009.

The plane is expected to be delivered to Air India in June.

Update April 30: As you'd expect, the first South Carolina assembled 787 Dreamliner was publicly unveiled to much fanfare, and even some fireworks.

You can see the "action" in the video below — and get more of a feel for the event with a collection of photos on Flickr.

Also, the Charleston Regional Business Journal﻿ offers up a nice photo tour inside the plant and of the 787 Dreamliner unveiling.

The plane will be put through many more paces and checks before being sent to its buyer, AIr India.

First Report Today will not only mark the first 787 Dreamliner will roll out of Boeing's new North Charleston assembly plant, it will also mark the first time that company has fully assembled a commercial plane outside Washington since World War II﻿.﻿

In all it will be a large event with Boeing officials, 6,000 employees, and invited guests attending — including Governor Nikki Haley.

Festivities will ramp up around 1 p.m. and the plane is expected to be unveiled at 1:30 p.m.

However, the press onslaught is already underway with the media being given a tour — follow the up-to-the-second story with the Twitter feed below.

See past Boeing news on our Topic Page.