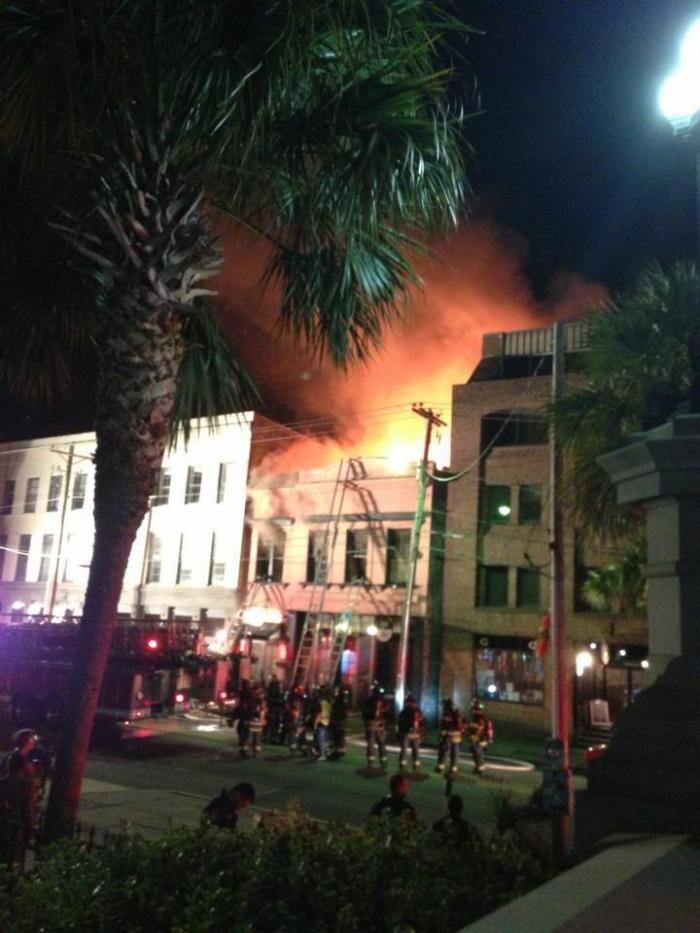 The early April fire at 213 East Bay Street burned the business homes of Light, Squeeze, The Brick, and Speakeasy, and now investigators believe they know where the fire started: in The Light'sstorage room and office area of the second floor.

However officials say the remaining clues are too far dispersed to point to a single cause in the fire, however they do note that the building had neither a fire alarm or fire sprinklers.

You can read the whole news release below:

Arriving personnel encountered heavy smoke and quickly entered the building to initiate extinguishment. The extent of the fire forced crews to evacuate the building and move to a defensive (exterior) operation. Fire breached the roof of the building and the roof subsequently collapsed onto the second floor. Fire personnel were able to prevent fire spread to the adjacent buildings that were in direct contact with the structure. No injuries were reported as a result of this fire.

Members from the Charleston Fire Marshal Division conducted a preliminary assessment of the property and initiated the investigation. The interior investigation was subsequently suspended due to structural concerns and for the safety of the investigators. Investigators proceeded to coordinate with property representatives, structural engineers, insurance adjusters and the insurance investigators. The City of Charleston Livability Division and the Building Inspection Division worked to quickly coordinate needed assessments and maintain communication with the ownership and area business partners impacted by the fire.

Investigators from the City of Charleston as well as insurance investigators continued to monitor the progress of the building while gathering additional information. A structural engineer developed the stabilization plan for the building and contractors carried out the plan during the following three weeks. Adequate shoring was in place by April 23, 2013, so that City Investigators along with approximately six investigators from various insurance agencies were able to fully access the second floor to continue the investigation.

Based on the observations and information obtained over the course of the investigation we believe the fire originated on the second floor within the business known as The Light. The area of origin has been isolated to the storage room and office area of the second floor. Due to the extensive damage caused by the fire, complicated by the roof collapse, the specific cause of the fire remains undetermined at this time.

The building was not equipped with a fire alarm system or a fire sprinkler system. Neither system was required at the time the building was originally occupied. The Charleston Fire Department would like to take this opportunity to offer a few suggestions to improve safety in your business: