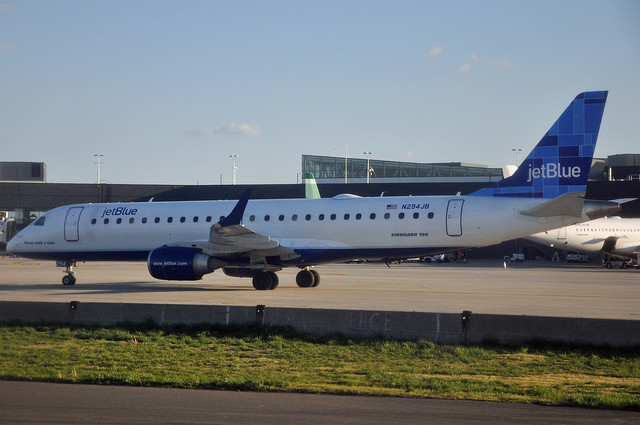 Update: As of Today, February 28, JetBlue is now flying from Charleston, twice a day with nonstop service from New York JFK and once a day to Boston BOS and two time to Boston on Saturday.

First reporting: First the Charleston airport got discount airline Southwest, then word came it would get AirTran thanks to a merger with Southwest, and now things just got even better: JetBlue is coming.

But the airline seems to be only testing the waters, offering twice daily nonstop service to New York’s John F. Kennedy International Airport (JFK) and one daily flight to Boston’s Logan (BOS).

The airline will be flying 100-seat Embraer E190 planes with leather seats, a first-checked bag free, and live TV on the back of each seat.

The Post and Courier writes that the deal is in large part thanks to the Charleston Area Convention and Visitors Bureau plunking down some $700,000 to help JetBlue market its services.

The concept and the idea of live tv back to the seats is impressive. this could really give a good entertainment to the passengers who boarded the flight. Once i have utilized these plane services due to my travel for essay writing service reviews company. It's a wonderful time i had that time.

This site is very interesting as it shares on the various awesome places out there. This post on the Flying Charleston airport proved to be a good read and I hope that the post will be useful to those who are going to the airport for the first time. online cheese shop

JetBlue is one of the best and most reliable airline company in the world and now flying from Charleston International Airport as well. Our plagiarism checker can help you a lot without ant kind of registration and investment.

$700,000 is quite a big amount of money to help JetBlue market its services. It would be a pity if a little was done using this money. Buy Research Paper

JetBlue now flying from Charleston Int airport, ya I’m so much familiar with this airlines, the services of this airlines is so lovely and surely those who will fly through this airlines definitely they will like to fly again & again. The seating system is so good, also food are so delicious. awriter.org/essay-writing-services

Jet blue has offered a good range of prices in the past to most places around the United States for past couple of years. They have made significant changes to pricing and routes even last year. Also came along with some exciting offers for Christmas too. at&t deals

JetBlue in one of the best airlines in the world. Here you can read about its flight schedule and price.this is Test Link for you check this and enjoy