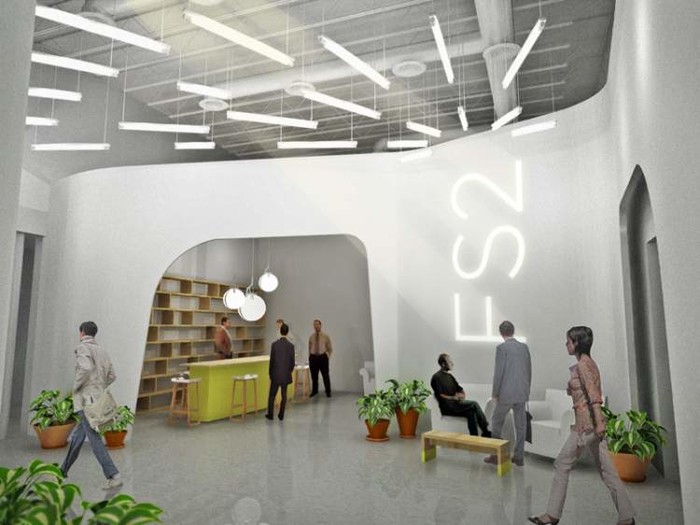 10:30 am on Monday May 23, 2011 | Posted by Ken Hawkins
Flagship 2: Charleston's incubator for knowledge-based companies is expanding

A rendering of the proposed entrance to the new space.

Nearly a year-and-a-half ago the City of Charleston waded into a new area: offering office space that was prepped and tailored for small knowledge based companies to get to work growing from day one into bustling companies with high-paying jobs.

And the Flagship was born, but the Digital Corridor's existing 11, 75-to-150 square-foot office spaces could only incubate these high-tech companies up to a few people and after that it's off into the wild blue yonder for these start ups, with no guarantee they'll land in the City of Charleston.

In that shortcoming the city has seen an opportunity to expand their campus at the corner of Calhoun and East Bay streets into a new 13,700-square-foot building that will allow for growth of existing Flagship businesses and attraction of larger high-tech firms.

So far six companies have "graduated" from the Flagship.

The new office will be dubbed "FS2" and office configurations will range from 300 to 5,000 square feet in the East Bay Street building.

The budget for the new space's revamping is in the half-million dollar range and The Post and Courier is reporting that the city is going after 10-year lease in the $150,000 per yer range.

The FS2 is expected to be ready for occupancy April 1, 2011, and the Digital Corridor will start evaluating potential tenants in January.

Update November 17: Greg Hambrick has penned a nice narrative on the new space for the Charleston City Paper; take a read here.

Update November 29: And the Charleston Regional Business Journal has added their own solid profile on the forthcoming space; take a read here.

Update May 23: The dedication date for FS2 is June 8th and The Post and Courier has a nice update on the progress, the tenants and the ideology behind downtown Charleston's business incubator; read it here.

Common spaces and hallways are shown in green, and the large opening shown in the top photo being in the middle of the facility.