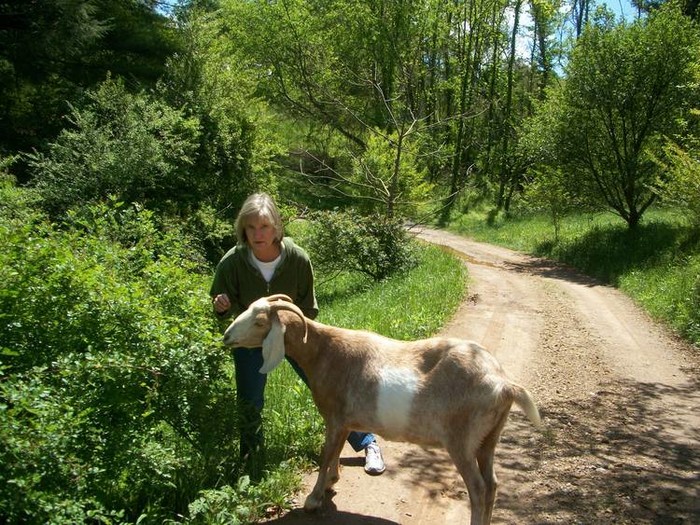 Sign in window of plant nursery:  “It’s spring, I’m so excited I wet my plants!”

The half circle path scrolling along the back of our property borders a creek, where wild azaleas grow.  Palest powder orange and show stopping red and pinkish orange blooms abound but don’t last long. We made a special effort to walk the path, while they were flowering.

Elsa, our pet goat, loves to go on walks with us and did not appreciate being left behind. She bleated indignantly. “We took you last year,” Gordon reminded her, “You tried to eat the blooms.”

As we walked, we thought about the many historical azalea gardens in Charleston. We also thought about our garden. Last year was not a huge success. We need inspiration.

We were at the Flea Market the next weekend when we saw them, a stack of used terracotta pots of every size and shape. “How much,” we asked?  The vendor named a price lower than expected and kindly boxed them up for us.

The next day we saw them again, small green potting containers on each side of the road, obviously dropped from a passing vehicle. “It’s another sign,” exclaimed Marcia.

“A sign of what,” said Gordon, who was reading a newspaper, while Marcia drove.

“A sign we should plant in pots,” Marcia mused. “We’ll plant flowers and mint and other herbs and heirloom tomatoes in small containers. We can sell them!” There was silence from behind the newspaper. Yet the seeds and a vision of terracotta gardens like those of ancient Babylon had been planted in our minds.

We have flunked some form of gardening every year of our married life. We have been married 27 years. We have had successes every year but they say you learn most from your mistakes.

One year we learned that cow manure, dried but straight out of Marcia’s family’s cow barn, contains fly eggs, lots and lots and lots of fly eggs, and weird plant seeds too. The veggies were very good that year.

Our first attempt at commercial gardening was to plant our entire hill with gourds. We have a big hill and these were not just any gourds; these were bushel gourds, named presumably for their large size.  After harvest, we placed them on our back deck to dry. That year we learned that possums (or possibly raccoons) need very little time to carry off an entire crop of bushel gourds, rip them open and munch down on the seeds.  In our defense, the gourds did not look at all edible. Fortunately, we had brought the largest gourds inside before the feast.

Last year was the year of the raised bed. It was a humbling experience despite the admiring glances of friends who would look out on our garden and say, “You have raised beds!”  We would smile and modestly reply, “Yes, we have raised beds.”

We filled our beds with compost and planted tomatoes, peppers, herbs, squash and strawberries.

Did you know that walnut trees emit a substance that goes out for thirty miles or so (well maybe 150 feet or so) that is toxic to many other plants? Marcia confesses it sounded like an old wives tale to her but as Linus in the Charlie Brown cartoon once said: “Some of those old wives were pretty smart.” Two of our raised beds were near a walnut tree and when Agricultural Extension agent, Alan Durden, confirmed the walnut tree toxicity, we were forced to believe.

This year we will probably, once again, learn something we didn’t know.

Gordon Mercer is past president and on the Board of Trustees of Pi Gamma Mu International Honor Society and professor emeritus at Western Carolina University. Marcia Gaines Mercer is a children’s author and columnist. We love Charleston and have a place in nearby Garden City.