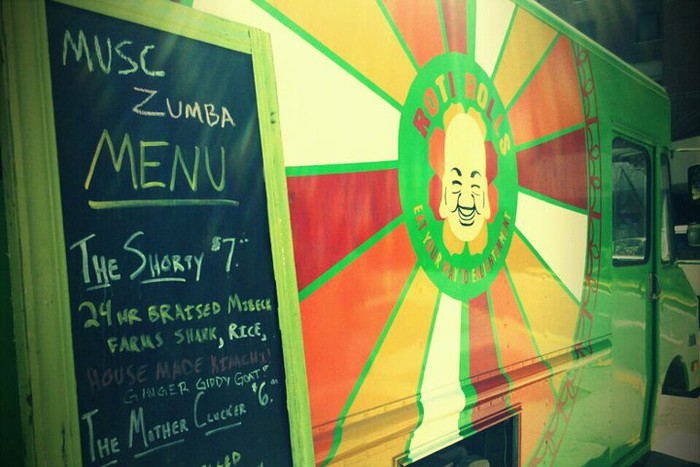 Chances are you may have seen the big green machine riding around Charleston.  Never fear, it's one of Charleston's major flavor contenders in the new food truck brigade, Roti Rolls.

Featuring an ever-changing menu focused on local ingredients, Roti Rolls focuses on bringing the "farm to truck" experience to their menu, as explained by owner, Cory Burke. Their meats, cheese, and vegetables are all from local farmers and growers.  Legare Farms, Giddy Goat Cheese, Ambrose Farms, Chucktown Chicken, and Kennerty Farms are just a handful of the local providers for Roti's menu. So what exactly is a "roti roll" you ask?  It's a wrap with resemblance to pita bread, but made with special roti dough. Every roti is made fresh to order, with a puffy, flaky texture on the outside, with a warm and doughy inside.  Roti Rolls also features breads such as partha, which is rolled with green onions, garlic and spices, and chabiti, which is made of whole wheat flour.

And it gets even better.  Mix the roti bread with protein options such as local braised short ribs, marinated chicken, and even seafood, and you've got one delicious and complete meal on your hands.  "Our menu has asian, latin, korean, and indian influences," explains Burke, allowing unique offerings such as yucatan braises, anchoite rubs, dragon tongue mayonaise, miso ginger cheese, and more.

There's been quite a growth in food trucks in Charleston recently and an equally as large demand, but  Burke still thinks that some folks are apprehensive about eating food out of a truck.  Roti Rolls would like to show folks that just because it's served out of a truck doesn't mean it can't be fresh, local, affordable, and good for you.

Burke and Roti Rolls are also forming the Charleston Food Truck Alliance,  to promote collaboration and cross promotion within the growing food truck community in the local area.

In true food truck tradition, Roti Rolls is always on the move throughout Charleston, and the best way to keep up with them is by checking out their Twitter and Facebook pages regularly for daily announcements on their locations.  However they can often be seen at the Remedy Market at 162 Spring St, or at the Charleston Farmer's Market in Marion Square on Saturdays.  They are also available for special events, and can be contacted at iheartrotis@gmail.com, or by calling (843)-735-9664.

Be sure to follow along all of Charleston's food truck's happening on our Food Truck landing page.