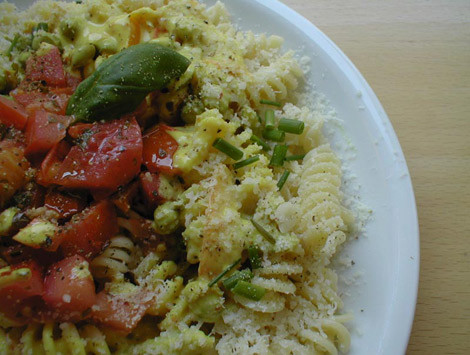 Image by stock.xchng user microbiImage by pasta.jpg Looks good, doesn't it? There's no shortage of Italian specialties here in Charleston.

Coming from an Italian family (check the last name, folks), here's a story that went straight to my heart. Or stomach, as it were. The Charleston Mercury has a great article about Italian influence on the culinary landscape here in Charleston. Whether you're talking about pasta or atmosphere, there's definitely a lot of Italy right here in the Holy City.

The Mercury describes four aspects of this influence. First, it interviews Brian Rio Betolini, whose pasta can be found in many Charleston-area restaurants:

Brian is a Charleston culinary treasure. He produces 240 different pastas, about seventy kinds of ravioli — all this, with no staff. He has only part-time freelance help. If you want to savor Brian’s pastas at home, they are sold in several retail outlets and also at the Saturday market in Marion Square. Do not miss his saffron papardelle, the lobster ravioli with black truffle.

Second topic: hospitality. As Jacques Larson of Mercato puts it, one of the greatest features of Italian restaurants is the hospitality. The Mercury writes: "It is all about making people happy," (Larson) says, explaining that he is happy to fulfill special cravings for such dishes as pasta putanesca or bucatini all’ amatriciana.

Then there are the candle-lit, intimate locales, such as Muse or Fulton Five, that offer a more private dining experience, something often lost in broad, open dining rooms.

Last of all, the Mercury writes about the Slow Food movement, which began in response to the spread of fast food establishments:

The Slow Food movement, which is influencing so many Charleston chefs, was born in Rome as a result of the outrage over a McDonald’s at the foot of the Spanish Steps. Slow food is the opposite of processed food, fast food. Slow food is artisanal and local. The owners of Modica were among the founders of Slow Food Charleston. It is a great place for lunch. Their four-cheese panini is the ultimate toasted cheese sandwich. Like the chefs of Mercato, Monza, Muse and Carolina’s, Vince Liviola, co-owner of Modica, is meticulous about the source of his ingredients. Either it is local, comes from Italy or is made in-house, such as the mozzarella or gelatos.

So are you hungry for Italian yet?